Amid all the hoopla, Pembroke could be on for another pair of national titles over the weekend as they look to retain both the men’s senior and junior cup titles.

Saturday’s battle with Cork C of I sees the side come up against an old friend as the highly decorated Trevor Dunne returns to Dublin for the weekend. Dunne spent several highly successful years with the Serpentine Avenue outfit in between two spells with the Garryduff club.
He is one of three involved in Saturday’s squad who played in 1993, the last time C of I claimed the prize, along with Richie Dorman and Derek Hales. The trio, along with Stephen Parker, also bring All-Ireland senior success in the form of the 2003 club championships to the table.
Pembroke, though, have been resurgent since Christmas with top young players Scott Furlong and Scott Lowrie (above, left) – converting from his coaching role in the early stages of the season – returning to the fold.
What could throw a spanner in the works for their three-in-a-row hopes could be how many players from the firsts match day 16 Craig Fulton is willing to let play a full part a day before the senior final.
Should a complete line-up be available, Pembroke are an awesome proposition as evidenced by their 5-2 win over league winners Monkstown last Saturday with Maurice Elliott the major threat.

On the women’s side, Railway Union II will be looking to go one better than last year’s IJC final appearance and add to the the ever-growing silverware collection at Park Avenue.

de top school’s players Sarah Greene and Deirdre Duke (pictured, right).
Elsewhere, there is a trio of important domestic games on Saturday. UCD’s hopes of retaining division one status rest on their playoff shoot-out with Bray on Saturday afternoon.
While results tell the tale of a season, rival coaches have been suitably impressed with the Belfielders application this term though closing out games has proved the problem on occasion – the late loss to Fingal a case in point while they a 2-1 deficit against Rovers was transformed to 5-1 inside the last eight minutes in the league.
Bray, meanwhile, have been on the up since Christmas to emerge from the pack and take second place ahead of Skerries and Avoca. Simon Cox is the key man up front but Cliff Bailey is the real jewel as he showed in recent weeks he can still embarrass defenders at will.
The draw with Clontarf was played at an incredible tempo and if Bailey can combine with Mark Brooks and Jamie Crawford while Greg Keeley holds his end up between the posts, it could be a very tricky day for the students. Their experience from last year against Suttonians, though, should hold them in good stead.
Three Rock Rovers II take on YMCA II, hoping to reverse their 2-1 extra-time defeat in the IJC with a Railway Cup final success.
Ross Harris’ side has saved their best form for this cup, ousting Pembroke in the semi-final stages as they have aimed to bring on the talent of Shane Madeley, Tom Samuel and David McCrea.

Experience comes in the form of Graham Dowling and Ross Varian. Ger Butler’s YM, though, would appear to be favourites for the crown having finished just a point off the pace in the league and reaching the IJC semis.

Jacob Webber is an obvious threat – he scored the winner in that IJC game – while Graham Woods is a tough man to beat. He shared Leinster U-18 duties with his opposite number Wendel Armstrong back in the late 90s and how each one fronts up could well be the difference.
The U-21 fin 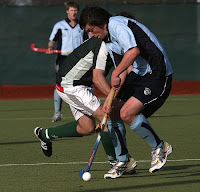