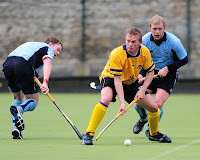 Pembroke will hope to push the eligibility controversy to one side and focus on the hockey as they bid to retain the Irish Senior Cup on Sunday afternoon against Cookstown at Belfield.

Following a meeting with the IHA last night, Mossley have decided not to pursue their query any further, accepting that the “participation of an ineligible player by Pembroke, against them, was a result of genuine and unintentional errors by Pembroke and the IHA”.
The issue, though, seriously threatens to ruin what is normally a marquee day in Irish hockey, set to be broadcast on RTE on Monday evening, with certain quarters threatening to boycott attending what is normally a guaranteed game to watch for the hockey community.
An additional statement released this afternoon added “Mossley HC has acted entirely honourably in this matter, seeking only clarity on the issue, and has at no time sought for penalties or action against Pembroke”.
Such timing in the build-up to the final has made it an especially unfortunate affair for all concerned, whatever the rights and wrongs of the situation.
Now is the time, though, to focus on what could be an intriguing game. Last time Cookstown and Pembroke met, they played out a scoreless draw at Coolnafranky using the IHL rules. Such a format has not seemed to be conducive to the Tyrone club’s game this season but in the major competitions using the original rules they are as yet unbeaten.
Ivan Steen has recovered from a cracked kneecap and is likely to be a key man, pulling t 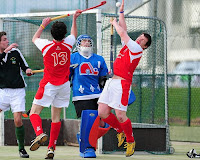 he strings behind Stuart Smyth and Andy Barbour. Midfielder Thomas Hutchinson, though, misses out due to a severe knee injury that will require surgery and at least a six-month lay-off.
In Pembroke, though, they face the form side in the country right now, picking up the EuroHockey Club Trophy and the Leinster title in the last fortnight.
Justin Sherriff, Mick O’Connor and skipper Alan Giles had slight niggles for their match against Monkstown but should come through to play. There is the additional banana-skin of their junior cup final where squad players may be played and subsequently injured – an interesting juggling act for Craig Fulton.
With an EHL place on offer, and the heightened interest created by this week’s drama, all concerned hope that hockey will do the talking on Sunday.
Men’s Irish Senior Cup final: Pembroke Wanderers vs Cookstown, 1.15pm, Belfield
Preview of Saturday’s action
UCD hope to bridge 58 gap