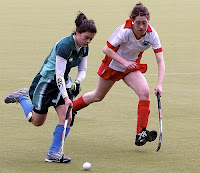 In the first set of international games against Belgium this week, as the U-16 girls won while the men’s A side and boy’s U-16s lost out.

The U-16 girls took little time to get up and running in their game, Lucy McKee netting inside three minutes. Belgium levelled from a corner to make it 1-1 by the break but Joanne Orr’s strike from a penalty corner second phase restored the lead.

An equaliser followed soon after but Aishling Naughton (pictured, left, on the attack for Mount Anville) popped up to finish off a breakaway to take the honours, 3-2.

First out at Belfield, the boys enjoyed slightly the better of a cagey, scoreless first half with Nick Burns’ reverse well saved while a drag-flick was saved off the goal-line. Fiachra Maher picked up a nasty injury in the 26th minute due to a wild swing – an action that saw a Belgian goal chalked off in the process.

However, the visitors began the second half in lively fashion to score three goals before Burns 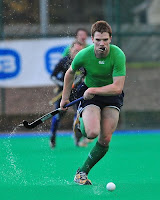 pulled one back after Shane Madeley had stolen the ball on the left flank. Belgium added a fourth, though, to complete the scoring at 4-1. The Irish, meanwhile, will be disappointed to have let seven corner opportunities go unconverted.
Last match on court, Ireland A’s scored three minutes from the start and the end of the match but ultimately fell to a 3-2 defeat. Jonny Bruton (pictured, right) got the first while Gareth Watkins scored at the death.

Results (all at Belfield)