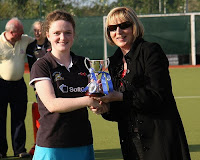 Fresh from her ISC triumph as UCD coach, Mary Logue stepped into her other role this morning of Irish U-18 coach to announce an 18-player squad for a two day series against Scotland at Bellahoutson in Glasgow on May 8 and 9.

Loreto pair Hannah Matthews and Ali Meeke make the trip as does Pembroke’s Orla Fox. Six players from Connacht are included with three from Ulster and Catholic Institute’s Naomi Carroll the sole Munster representative this time out.