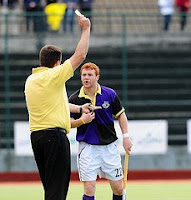 In response to a recent query put to The Hook, the Leinster Hockey Umpire’s Association has laid out below the recruitment process to becoming an umpire. It is the same path that Ray O’Connor followed along with top current umpire Geoff Conn, leading to them travelling around the world, getting to see the action at its closest:

New members should contact LHUA through the 2008/09 Appointment Secretaries. For the ladies’ side, Brian George can be contacted at brian.r.george@hotmail.com or 087 1270119 while on the men’s side Tom Goode is the point of contact at tgoode@revenue.ie or 086 2160673.

From there, potential umpires can advise what experience they currently have, what level they are currently umpiring at, your availability and what level you aspire to.

From there, the LHUA appoint to appropriate fixtures with senior umpires to partner you with at an early stage with mentoring also available along with umpiring shirts, jacket, cards and whistles.

Grading forms are completed throughout the season and post game debrief are encouraged while the LHUA run coaching sessions throughout the season which should be attended. These take the form of Q&A, new rule discussions and video. The LHUA also use headsets to assist and develop umpires.

The LHUA has three grades (3 – Foundation, 2 – Intermediate, 1 – Senior)  that umpires progress through based on reports and gradings. Currently Grades 1 and 2 umpire in the Leinster Senior League.

Should you have any further queries, contact the relevant appointment secretary above. This post will be re-posted as the 2009/10 season approaches so as to offer potential umpires a reminder as hockey gets back into gear next Autumn.