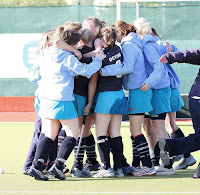 Hermes II claimed their third Irish Junior Cup, overcoming a last minute equaliser to eventually win on penalty strokes over Railway Union II who were denied for the second year running at the final stage.
The opening stages were a cagey affair with Caitlin Friel having the pick of the chances for Railway Union after Ruth Hutchinson and Julie Motherway combined down the right. Yvonne Kenny saved well as did her counterpart Jill Whelan from Hermes’ first corner of the game.
The real drama, though, came after the break as the pitch opened out. Sarah Greene was becoming a stronger influence as she moved up into midfield, using her tight skills to win a corner. Aisling Keane’s straight hit was again denied.
Railway’s move to half-court press started to pay dividends, meanwhile, as they picked off possession a couple of times notably when Caoilfhionn Rowan played in Patricia O’Dwyer but the experienced Jill Hodgins got back quickly to snuff out the danger. 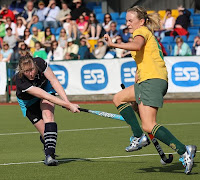