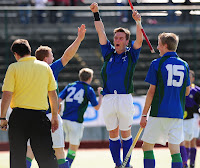 Cork C of I ended a 16-year hiatus to comprehensively take the Irish Junior Cup out of Pembroke’s hands with an emphatic 5-1 win at Belfield this afternoon.

Their mixture of youth and experience was used to dynamic effect by coach Dermot Judge – son of Leinster Branch President David – who varied his line-up with great aplomb to get the most impact from his key players.

Experienced heads Trevor Dunne and Mark Holmes took on the first quarter of the game before making way for young flyers Stephen Parker and Irish U-16 international Nick Burns.

And in a similar manne

r to the wins over Cookstown and Glenanne, C of I got off to a whirlwind start with two goals inside the first six minutes.

Holmes and Dunne made the vital interventions, the latter crossing for the former to delightfully deflect home the first.

It should have been two inside a minute when Andy Gray batted home a rebound but umpire Alaistair Schutte pulled play back for a penalty corner. Three more followed in quick succession before Dunne smashed across goal, picking up a defender’s stick and into the net.

“That’s the tactics for the whole season. We reckon those two forwards will break the first 20 minutes of their defence and then bring on Stephen Parker and Nick Burns to add pace and that usually works for us.”

That start, though, subsided quickly as C of I spent much of the half pinned inside their own half.

Pembroke forced seven penalty corners in the half, the third of which was rebounded by Maurice Elliott – Pembroke’s most dangerous outlet – for 2-1.

Derek Hales took one off the line from Michael O’Connor as Billy Lynch pulled off a string of top saves, memorably plucking an O’Connor drag-flick from the top corner with a full length dive.

C of I’s sporadic attacks, though, yielded a series of good chances.

Once again, the umpire was too hasty to blow his whistle as Nick Burns followed up Roger Gray’s shot to net. C of I, though, were not to be denied as Andy Gray duly roofed the corner given in the aftermath and a healthy 3-1 advantage.

The second half proved a less free-flowing affair, the game stuck between the 25s, suiting to the leaders to a tee. O’Connor was sin-binned for ten minutes, mainly due to frustration, taking two bites at Andrew Scannell.

It took nigh on 20 minutes for the first chance in earnest, Dunne playing in Stephen Parker who was denied by the advancing Simon Thornton.

Victory, though, was sealed soon after as Burns intercepted Michael Tijs’ poor ball on halfway, fed Roger Gray down the left flank. The forward out-foxed Thornton, taken down with the goal beckoning, to win the crucial penalty stroke, slammed home with ease by Andy Gray.

And he rubber-stamped the issue in the 59th minute from a switched corner to complete a five-star performance.

Judge afterwards felt the result was the culmination of four years work with the large underage contingent in his squad.

“All the six young fellas started with me, brought them all up and they joined a good lot of first team players coming down and that’s what junior cup is all about.

“Pembroke were very threatening, they had us on the ropes for most of the first half and we were lucky to get two early goals and hold on.”

For Trevor Dunne, this was his third Irish junior success, having won the title with C of I in 1993 and 1996 with Pembroke but felt the victory is a major milestone for the young up-and-comers. “We haven’t won it for 13 years so if we didn’t win today it might have put us back a couple of years for these young fellas.”

He admitted it was hard to come up against his old club, though, given his fond memories of his time in Dublin but knew they would not give an inch either in this battle.

“Pembroke are a great club, very similar to Ci, great family club so it’s hard but someone has to win, they would have taken 5-1 over us as well.”

* For more of Adrian Boehm’s pictures from the game, click here