It looks now a straight race for the division two playoff spot between Bray and Skerries with both facing tough home fixtures on Saturday. Bray welcome Dublin University, a side looking to get one over on the Wicklow-based side. The last time the pair met at Loreto, Cliff Bailey and and Phil Marshall dovetailed superbly to send the students down.

Trinity are much improved since Christmas but Bailey is now back in the fold for Bray and could be a vital factor. Skerries, meanwhile, will look to Brian McMahon for the inspiration as they look to break Clontarf’s 100pc record. Nick Burke and Stephen Ludgate are both out for the Bulls but hope to have Gareth Borland back in action.

Elsewhere, Suttonians and Avoca will hope results go their way and nick the win in Sutton Park to keep their very faint playoff aspirations alive. Navan and Naas face off in the wooden spoon decider at Sportslink.

One division one game for both the men and the women on Sunday. After the intense battle due to take place at Serpentine Avenue on Saturday, Pembroke will hope they will still have enough left in 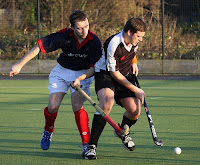 the tank for the trip to Kilkenny.

UCD’s women, meanwhile, can keep their fine run going with a win at home against Corinthian. A loss for Scott Crombie’s team would mean they are definitely consigned to a promotion/relegation playoff with Genesis.