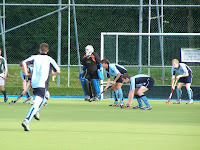 Monkstown II and Corinthian II will face off tonight at 8.45pm in Serpentine Avenue for the division three title after they finished the regular season level on 39 points from the 18 games.

On Monday night, St Brendan’s Phoenix Park got the point they needed to win division five, tying 3-3 with Railway Union IV.
The Neville Davin Cup final date is set to be changed yet again. The final – initially moved back from April 19 due to the junior interpros – was set for May 2 but will not now go ahead. May 7 has been  touted as an alternative date but may yet change under agreement between Clontarf and Trinity, both anxious to play the match sooner rather than later.
YM to retain coaching ticket
IHA set to release statment over Mossley appeal