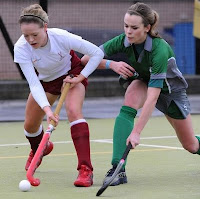 Loreto all but qualified for the finals weekend of the IHL with their third bonus point win and have obtained 14 out of a possible 15 so far. The only way they can be eliminated is now on goal difference should they lose to Railway and Pegasus score a hatful in round five.
Quick starts have been a hallmark of the Beaufort side’s success this term and they got into their stride early with Zara Delany (pictured, top left) netting her sixth of the competition. Nikki Keegan made it two four minutes later from the penalty spot.
After the sides between them amassed nine unconverted corners, Randalstown did sting Loreto before the break with Vanessa Surgeoner knocking in close-range.
Lizzie Colvin’s reverse restored the advantage before Rebecca Dallas’ drag-flick made it 3-2. Ali Meeke, though, made the three-quarter team-talk less fraught when she snapped up a rebound. And Cathy McKean secured the bonus point in the last quarter to take a commanding lead at the top of the group.

Cork C of I 0 Railway Union 2 (Jean McDonnell, Patricia O’Dwyer)
Railway eased by Cork C of I but may yet rue not taking more advantage of 13 penalty corners and a rake of chances. They left Cork without a bonus point which means they must better Pegasus’ performance in round five against Loreto to guarantee a semi-final place.

Jean McDonnell scored from the third corner before setting up Patrica O’Dwyer – scoring a second senior goal since breaking into the Railway first team. O’Dwyer got a close-range touch on McDonnell’s cross.
But C of I were more resolute in the second half and created some reasonable chances in the third quarter. But Railway pummelled the Garryduff goal in the closing ten minutes without reward, including one final effort being deflected over the bar by former international Deirdre Casey.
Belfast Harlequins 1 (Claire Coey) Pegasus 5 (Suzanne Beaney, Kristy McCollum 2, Hannah Clarke, Fiona McIlwaine)
Pegasus kept pace at the top of Pool A with their 5-1 win over city rivals Belfast Harlequins at Deramore Park. Harlequins hit the front through Claire Coey, deflecting home their second corner in the 10th minute.
But the recently returned from injury Suzanne Beaney made it level by quarter-ti 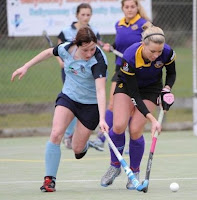 me before Kristy McCollum’s double put Pegs firmly in control. Hannah Clarke sealed the bonus point before Fiona McIlwaine made it five inside the final quarter.
POOL B
Armagh 1 (Emma Thornbury) UCD 5 (Roisin Flinn, Lisa Jacob, Catriona McGilp 2, Liz McInerney)
UCD ran riot in the second half of their trip to Armagh to stay right in the mix for second place in Pool B. Roisin Flinn opened the scoring in the 22nd minute from the flick-spot but were pegged back by Emma Thornbury’s deflection.
The second half, though, belonged to UCD who hit the front yet again when Lisa Jacob scored 15 seconds after the turnaround. Catriona McGlip made it 3-1, finishing off a goal-mouth scramble before confirming the bonus point with her second of the day in the final quarter.
Liz McInerney completed the rout on the final hooter with a bashed penalty corner.
Ballymoney 4 (Nicky McCaughran 2, Bridget McKeever, Susie Martin) Pembroke Wanderers 2 (Alice Ward, Aoife O’Gorman)
Ballymoney moved ahead of Cork Harlequins into second place in the group with their 4-2 win over Pembroke. Two good corners had them 2-0 up thanks to Nicky McCaughran’s deflection and Bridget McKeever’s straight strike.
Aoife O’Gorman (pictured, right) pulled one back from another corner and Alex schoolgirl Alice Ward equalised matters in the 38th minute. But Money finished the stronger with two goals in three minutes at the back end of the third quarter. Susie Martin’s corner strike restored an advantage before her free-in was deflected in by McCaughran.
It ends Pembroke’s chances of qualifying for the semi-finals while advancing Ballymoney’s claims.
Hermes 3 (Jenny Burke 2, Aoife Harte) Cork Harlequins 0
All-Ireland champions Hermes became the first side in IHL history to guarantee their passage into the finals weekend as they swept past Cork Harlequins 3-0, thanks to Jenny Burke’s brace

either side of Aoife Harte’s goal.
They lead the group by four points and need just a bonus point to go through in first place while Harlequins drop from second to fourth and will need a good win over Armagh at Farmer’s Cross to stay alive in the IHL.
* For Deryck Vincent’s pictures from the Hermes vs Cork Harlequins’ game, click here
IHC, IHT and IJC round-up
Men's IHL: Round Four results