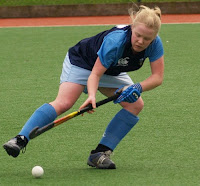 UCD’s campaign to requalify for the 2009/10 IHL took a slight dent at Belfield tonight as Bray held firm to pick up their fourth point in three days. Both goals came inside the first quarter of the game with Roisin Flinn’s scrappy effort opening the scoring.
Cheryl O’Toole slammed home a corner and that was the end of the scoring. From then on, chances were hard to come by as Grania Howe and Elaine Brommel defended solidly while Mary Goode was on hand to pull off impressive saves from international colleague Lisa Jacob – one from close-range after Catriona McGlip’s (pictured) baseline pull-back, another from a switched corner.
The latter came in the students most dominant patch with Mairead Mahon in the sin-bin. Flinn took the ball a little too wide after a surging run while Liz McInerney’s reverse was blocked and Jacob’s rebound was brilliantly blocked by Brommel to ensure the score stayed at 1-1.
Smyth named in Ireland A panel
Leinster school's round-up