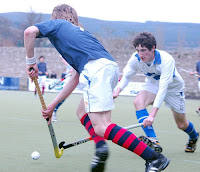 Wesley’s juniors mirrored their senior counterparts in virtually every way as they retained their title with a 3-0 win at Grange Road this afternoon. They beat the same opposition, a young St Andrew’s junior team, on the same scoreline with all the goals, once again coming in the second half.

The game opened in controversial fashion with both sides reduced to ten-men inside six minutes. David McCrea was first to go to the bin for, as last man, taking a high-ball over shoulder height with an Andrew’s forward in behind the sweeper.
And Jake Beirne followed him to the line 75 seconds later after he took three bites at a flying Tom Samuel, unable to get a clean tackle on the flying Irish U-16 player.
Both sides cancelled each other out during the ten-v-ten period and, restored to full strength, Andrew’s got the first sight on goal when Tim Blythman fortuitously stole the ball on halfway, allowing him a clear run on goal.
Rob Fitzgerald, though, stood tall and made a hard stick-save look easy. That chance appeared to awake the powerful Wesley forward line, with Shane Madeley blasting just wide and Nick Armstrong clipping over.
McCrea saw a high drag-flick batted away by Jakim Bernsden before Samuel’s run and shot, skimmed the outside of the post on the stroke of half-time. Indeed, the physically stronger Wesley dominated the period before the break but found an Andrew’s backline well-commanded by David Cole and Conor Stephens.
Their resolve was broken, however, just a few minutes into the second half as Samuel

(pictured, tracking Ravin Nair) got the goal his captain’s performance deserved when he showed real composure to take a touch from a baseline pull-back and roll into the backboards from eight yards.
Madeley fired in a drag which Cole picked off nicely before Armstrong struck the side of the goal as chances came thick and fast but it was a moment of real quality that eventually sealed the game.
Jonathan Lewis got it, finishing a good move with a delicate touch to lob the on-rushing Bernsden. And Armstrong added the finishing garnish with a superb blast from the D’s edge which zoomed off the inside of the post and in to complete an impressive day’s work.
* For more pictures from the Wesley vs St Andrew’s game, click here
Sutton Park break Cup duck
Ask Ray… week four