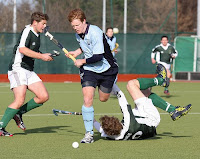 After a busy couple of weeks traversing the country to take in a host of club matches, Paul Revington announced today what can be seen as his first autonomous international squad selection.

He named 21 players for a two match series with France to be played at Serpentine Avenue with Monkstown’s Gareth Watkins (pictured) a notable inclusion. The striker had dropped off the radar of national selectors after being included in Irish development panels a few years back.
Niggling injury concerns had kept Watkins on the sidelines but, back at full pace, he has netted an incredible 31 times this term – the vast majority from open play – scoring five in three separate matches while also netting an IHL hat-trick against Cork C of I.
He is included for the second of the two matches against France which will be played on March 24 and 25. France are considered to be Ireland’s bogey team, relegating Ireland to European B division hockey, and lie a place ahead in the world rankings at 17.
John Jermyn and Mikey Watt, meanwhile, were not considered due to exam commitments for the matches will be used as part of Revington’s building process towards a busy summer which will sees Ireland compete in the Champions Challenge II, Celtic Cup and the Europeans.

Speaking about the upcoming games, Revington said, “The games against France come at a good time in the club calendar after which our senior squad players will have enjoyed a series of tough games at league, ISC, IHL and Interprovincial level.

“All senior squad players will take this form into the games versus France . The squad will also enjoy their third training day together on Sunday 22nd March in Banbridge in preparation for these games.”