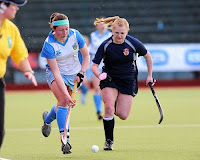 UCD won the battle of the students to keep alive their hopes of claiming the Irish Senior Cup for a second time – the previous coming way back in 1951. They added the scalp of fellow students Ulster Elks to their list of victims in an intriguing cup run which has seen the students beat both of Leinster’s most celebrated pair of recent times – Loreto and Hermes.

They were made to work by an Elks’ side, powered by Emma Clarke in midfield. Lisa Jacob gave the Belfielders the lead with a neat run and shot but her side were pegged back Lyndsay Neish’s goal, leaving the game delicately poised in the second half.
Former St Andrew’s student Rachel Burke, though, popped up with the winner. They now advance to take on three-in-a-row chasing Pegasus. The Belfast side with Irish Hockey’s Player of the Year for 2007/08 Claire McMahon netting the winner in a 2-1 victory over Ballymoney.
Former Irish team mate Lynsey McVicker got on the mark for ‘Money but McMahon’s goal, in addition to Julie McKnight’s earlier effort sealed the day.
The pair showdown on April 26 with UCD enjoying home advantage at the National Hockey Stadium.
On the men’s side, Cookstown are the side that stand in Pembroke’s way of retaining their ISC crown. The Tyrone club beat Annadale 3-1 with goals from Ivan Steen, Thomas Hutchinson and Andy Barbour among the goals.
Their luck did not hold, though, for the Junior Cup as Cork C of I edged a cracker with the odd goal in seven – Richie Dorman scoring a last minute corner.
Once again, Pembroke are in the final pairing, thanks to Stu Loughrey’s double to put the possibility of a Senior/J 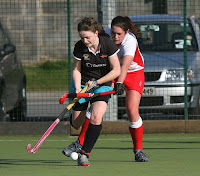