Three Rock Rovers 3 (Ross Canning 2, Shane Madeley) Railway Union 2 (Jeffrey Spillane, Kevin Wong)
Two famous names graced Grange Road in the day’s curtain-raiser as the next generation of Cannings and Madeleys combined to deny Railway Union’s late surge which put them on the brink of a famous comeback.
Ross Canning, son of Irish international Liam, got Rovers off to a superb start with a fierce reverse into the roof of the net inside six minutes.
Shane Madeley – whose father Robin was also an Irish player – went close to doubling the advantage three minutes later but saw his low drag denied by Mark Ingram’s superb stick-save as Three Rock settled into the big occasion the quicker and held most of the first-half possession.
But, spurred on by the cultured sweeper David McCarthy and Kevin Wong’s midfield bite, Railway gained a foo

thold in the game about 20 minutes in, forcing Canning to clear off the line before the lively Angus Lloyd saw his effort clattered the outside of the goal.

The central tussle between Alan White and Jeffrey Spillane was intriguing to behold while Conor Quinn needed to be alert to race off his line to block Fiachra Maher on the edge of the circle as both teams warmed to the occasion.

It was Three Rock, though, who moved further in front just moments after half-time when Canning crashed home a corner-switch move, orchestrated by David McCrea and Madeley. And Canning had a tough chance to complete his hat-trick from Nick Armstrong’s pull back but his stretching, dived reverse 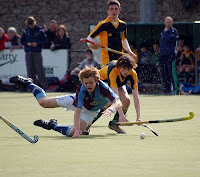 skimmed just wide of the post.
Railway, though, showed immense reserves of strength and character to dig out a passage back into the game. From their first penalty corner, the direct hit struck a foot on the line and Jeffrey Spillane stepped up to net the stroke in the 50th minute.
Quinn was on-hand to deny another Maher run moments later before Lloyd picked up the pieces and flashed agonisingly just wide. A leveller was forthcoming, though, Maher rampaged down the left-wing before pulling back for Wong at the top of the circle to clatter home and make it 2-2.
The momentum was with Railway but they were almost rocked on their heals when a foot

was missed, allowing Madeley a snap-shot. He rocketed high but Ingram reacted brilliantly to glove the shot away. Quinn was also called on to make a top save from a corner with five minutes left and Armstrong clipped a bouncing ball off the outside of the goal.
But with just 90 seconds left, Three Rock won their third corner of the game which Madeley ripped home to take home the Benny Atkinson Cup.
* For more of Emer Keogh and Stephen Findlater’s pics, click here and for Stephen West’s set of pictures from the game, click here
St Patrick's Day final schedule
Hermes retain Jacqui Potter Cup on strokes