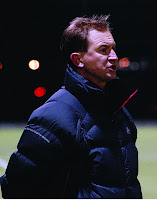 Leinster co-coach Colin Stewart has backed his side – with whom he shares the coaching role with Noel Keogh – to produce some fireworks at the interpos this weekend in Cork.

Speaking to the Hook this week, he said “it’s probably the most attacking squad I’ve seen in Irish interprovincial hockey. We played on Tuesday night and it was awesome.”
“There’s a few things we need to sort out, obviously, with any team that gets together but they look really fast, really sharp up front. Not just the forwards but everybody else and the short corner routine is pretty handy.”
Stewart cites his involvement with the team as both a player and a coach with Noel Keogh as his motivation to get back involved with the provincial set-up. Stewart was one of the first non-Irish players to play in the competition during the experimental year when three matches were played on separate weekends before ending the season with the traditional tournament.
As coach, he was part of the set-up three years ago that was denied by Ulster by a single-goal on goal difference.
Leinster bring an experienced side to the competition with Chris Pelow (pictured) the one man to make his debut. The Corinthian midfielder has come into his own as a player since having his penalty-corner responsibilities reduced at club level by Brian Doherty. He has been one of the reds stand-out players in their Mills Cup run and gets a deserved chance to impress.
Up front, Irish international trio Peter Blakeney, Alan Sothern and Mitch Darling are joined by 31-goal Monkstown man Gareth Watkins while there is plenty of midfield fire-power in Stephen Butler and Graham Shaw.
Looking at the opposition, Munster look a solid defensive unit with a teak-tough back six but may struggle up top. Jonny Bruton is a man who needs stopping while John Jermyn can be lethal as Stewart points out when he discusses the opposition:

“There all healthy otherwise they wouldn’t be there. I suppose Munster would be the underdogs considering last year but, you know, John Jermyn, Karl Burns, they’ve got class players. You can’t afford to let Jermyn have too many drag-flicks let alone the guys from up north.”

They are shorn of Jason Lynch’s trickery as he opts for Ulster, the province where he studies. It will be the second time in recent weeks that he faces old friends, a feeling he is quickly getting used to:
“I’d love to have played with Munster but I’m looking forward to it anyway, it should be an interesting weekend. I was a bit intimidated at the start (playing for ‘Garvey against C of I) but once you get into the game it’s OK, I’d be friends with a lot of the lads who would be shouting stuff anyway. I just zone out and play my own game.”
For Ulster, Bangor-man Chris Cargo is a late replacement for David Ames. Cargo plies his trade with Reading these days after a four-year spell with the Bath Buccaneers. The province is captained by Mark Gleghorne, a recent trialist with Dutch side Bloemendaal.
On the women’s side, Railway Union players abound across the provinces with nine current members and one recent departee involved in the competition.
The Railway-Loreto axis provides 11 of Leinster’s squad and will play a large hand in their success at this tournament as they hope to claim the title for the first time since 2005.
They begin their campaign this afternoon with what could be the tournament’s key game, playing Ulster. The Northern province arrive with a young squad featuring just two of the Pegasus ISC holding squad.
Loreto’s Lizzie Colvin and Ulster Elks Emma Clarke and Shirley McCay make up a feisty midfield and this could be the major battleground.
For Munster, the big name missing is Eimear Cregan who is still out injured while Connacht have drafted in Dearbhla Kieran and Audrey McCormack – Glenanne players with western ancestry.
* For more information on the tournament, click here
Doherty named in Ireland A squad
Women’s Interpros: Day One