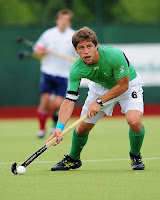 Ireland 8 (Alan Sothern 3, Peter Caruth 2, Graham Shaw, Eugene Magee, Ronan Gormley) France 2 (Thomas Becuwe, Fredi Soyez)
Paul Revington’s first match in charge got off to a lively start as the players endeavoured to show off their skills in front of the new man, warming up a wind-swept crowd at Serpentine Avenue.
“A new coach, a lot of positive energy in the team, enthusiasm and anticipation. You’re always going to go and put a good performance in,” was newly confirmed skipper Ronan Gormley’s (pictured, left) take on the game.
But he was quick to add a note of caution: “We can’t get too carried away. France started off well, but once we got on top they lost a bit of interest. They’re an international team, they’ve got some good players so they’ll be a new challenge tomorrow who’ll forget about today.”
Indeed, France went into a 20th minute lead, responding to Alan Sothern’s early drag-flick with a nice diving goal from Thomas Becuwe and Fredi Soyez deflected reverse. In truth, they were France’s sole efforts of note.
From there on, Ireland hit seven unanswered and could have had a couple more. Sothern levelled at 2-2 before Graham Shaw rocketed in an aerial from the right edge of the circle to make it 3-2 at half-time.
And the second half showed a real sharpness in the circle which Ireland have sometimes lacked. Eugene Magee took over corner duties to extend the lead before Peter Caruth scored two superb efforts – the first a rising reverse from near the endline, the second a beautiful move in tandem with Mitch Darling before Caruth used his 3D skills to take and finish in one 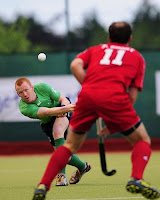 In between, Sothern made it six with his hat-trick from corners while Gormley rounded out the magic eight from the flick spot.

And Gormley was delighted to mark Revington’s decision to hand him the captaincy in a full-time capacity with a goal, especially at such an exciting time for Ireland: “To be given the privilege to, one, captain your country and then, two, to captain your country when there’s the talent and friends in the team with a real opportunity to do something special. It’s awesome.”
Gareth Watkins made his debut on the night while, at the other end of the spectrum, Karl Burns (pictured, right) appeared in green for the 99th time. He will have to wait, though, for his century as Conor Harte and Geoff McCabe replace Johnny Jackson and himself for tonight’s second game.
Women's Division One: Trinity 0 Old Alex 2
Women's A International: Germany 1 Ireland 1