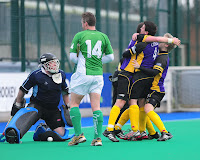 POOL A
Cookstown 2 (Tim Smyth, David Best) Cork Harlequins 2 (Colin Ross, Eddie Dore)
Cookstown picked up their third successive draw in Pool A but will be disappointed to have dropped points against already eliminated Cork Harlequins who went into the game shy John and Dan Hobbs and Mark Black.

Harlequins hit the front first when Colin Ross scored from a corner second phase. In a similar style, Timmy Smyth made it 1-1 by half-time. David Best gave the hosts the lead, tapping in from close-range before Stephen Cuddy hit the post which could have built a decent wedge between the sides.
And Eddie Dore took advantage of the let off, equalising eight minutes from time from a straight corner strike.

Pembroke 5 (Alan Sothern 3, Tim Lewis, Justin Sherriff) Glenanne 4 (Stephen Butler 3)
Pembroke maintained their second place in the group and – combined with Annadale’s 2-1 win over Inst – set up what could be a mouth-watering all-or-nothing tie with Dale in round five of the group games at Serpentine Avenue.

The battle between Leinster’s top two saw Alan Sothern – on his return after injury kept him out of the Mills Cup semi-finals – break the deadlock in the sixth minute. He doubled up four minutes later and he completed his hat-trick in the 22nd minute. His international team-mate Stephen Butler pulled one back from the penalty spot before scoring the Glen’s eighth corner of the half, giving rise to thoughts of a repeat of their recent league fixture.
Thoughts were made more concrete when Jonny Goulding deflected in, early in the second half to make it 3-3. Tim Lewis, though, stopped the rot when Sothern’s corner-shot was redirected in.
And Justin Sherriff secured the win with two minutes to go, flicking over Steven Doran. Butler completed his hat-trick in the last minute to pick up a bonus point. They remain in pole position in the group but will have to wait until the Annadale-Cookstown refix.
Anndale 2 (Peter Purcell, Ian Hamilton) Instonians 1 (Mark Gleghorne)
Annadale nicked the three points at Jordanstown to stay right in the mix for a semi-final spot, winning thanks to Ian Hamilton’s 62nd minute penalty-stroke. Peter Purcell opened the scoring in a tightly contested first-half, roofing after a neat combination with Paul Jackson.
Mark Gleghorne equalised from a corner, setting up a lively final quarter. Both sides had chances but the vital moment came Peter Caruth was fouled by Nigel Skillen, giving Hamilton the chance to win the game.

POOL B
Three Rock Rovers 4 (Peter Blakeney, Lucas Piccioli, Michael Maguire, Mitch Darling) Banbridge 1 (Simon Magowan)
Three Rock produced a far from vintage performance but still came away with a bonus point, once again leaving it late before scoring twice in the closing minutes to pick up all four points on offer.
A low-key first half saw Rovers hit the front in the 35th minute when Peter Blakeney rounded off Andy McConnell’s through-ball with a reverse that snuck past Gareth Lennox. Bann bossed most of the possession and territory in the early parts of the second period but fell two behind when Lucas Piccioli self-passed a free-in. Initially he looked for a pass but with no defender closing him down, he rolled into the circle and hit home.

Simon Magowan rounded off Eugene Magee’s pass to pull one back and had two gilt-edged chances blocked by Charlie Henderson to level within a minute. Rovers were under all sorts of pressure but moved 3-1 ahead from their only corner of the second half as Mikey Maguire slid in to redirect into the backboard.

It left nine minutes for either side to snatch a bonus point. Mitch Darling duffed two efforts before finally finding the net with 100 seconds to go to raise hopes of advancing. They now sit in second place with Cork C of I to play at Grange Road in round five. A draw may be enough as Bann would then need to win by four goals against Monkstown.

Cork C of I need just a draw from their final game of Pool B to confirm a semi-final berth after they held off Lisnagarvey’s challenge. John Jermyn’s low drag-flick was the only goal of the first half, one which C of I had the better half.
Three minutes into the second half, Jonny Bruton doubled the difference when he shot low under David Williamson. Garvey, though, were dominant in the second half with Mark Daniel and Mark Raphael going close before Peter MacDonnell gave the Hillsborough side a lifeline, diving onto former CI man Jason Lynch’s cross.
Garvey won eight corners in the second half, one of which came 60 seconds after MacDonnell’s goal, awarded just as Lynch rolled into the net.
Instead it was C of I who scored next, David Hobbs flicking in from 15 yards as he finished off a stunning length-of-the-field breakaway move that also involved Jermyn and Bruton on 58 minutes.
Cockram pulled it back to a one-goal game with three minutes to go and had one late corner chance for a draw but Adam Pritchard charged it down to keep C of I’s pole-position in the group. 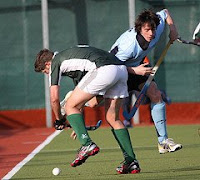 Monkstown 4 (Andrew Ward, Ian Allen, Gareth Watkins, Brian Groves) Fingal 1 (Derek O’Gorman)
Other results in the group rendered this game slightly academic but Monkstown picked up their first win of the IHL, putting one over a side they are currently keeping out of an automatic qualification place for next year’s competition.
Ian Horsfield’s yellow for a deliberate foot was the main talking point of a quiet first period, preluding a lively second half. Eamon Bane’s surging run paved the way for Derek O’Gorman to break the deadlock, flipping over the on-rushing David Fitzgerald.
It drew an immediate upping of the ante from the Town. Andrew Ward (pictured) forced a top save from Nigel Grothier before getting on the end of Brian Groves’ cross to level.
Horsfield and Gareth Watkins combined excellently to set-up Ian Allen for the go-ahead goal before Richie Dore was binned. During his time out, Monkstown netted two corners, Watkins netting the first before Brian Groves rounded out the scoring.

* To see Adrian Boehm’s pictures from Three Rock Rovers vs Banbridge, click here and for Pembroke vs Glenanne, click here. Deryck Vincent’s pictures of Monkstown vs Fingal are here.