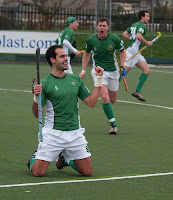 When Pembroke and Glenanne were drawn together in the same IHL group last May, it was immediately the tie Leinster hockey fans were drawn to. The past ten years has seen unmatched rivalry on the local circuit and they now get to transfer it to a higher place.

The Glens have been the form side in the competition thus far, tonking Instonians and Cork Harlequins while an away draw with Annadale was far from a shabby return.

They go into Sunday’s game with the knowledge that coach Arul Anthoni may have more time to focus on their games after he mutually agreed with Old Alex to step down from his coaching role at the Milltown club, effective from the end of the season.

And should Stephen Butler’s immaculate corner form continue – he has netted four times in this competition and produced what could equate to the perfect drag-flick against Rovers last week – Pembroke will always have to be on guard.

The famous comeback from 3-0 down will still be fresh in the Serpentine Avenue side’s memory and they are waiting on the fitness of Alan Sothern who missed last week’s Mills Cup semi-final.

Stuart Loughrey and Paddy Conlon were also absent that day while the ever-unfortunate Ronan Flannery is not likely to return this season. Justin Sherriff, though, did show some serious sparks of form and is developing a decent understanding with Mossy Elliott. How each side adapts to the EHL rules could prove the decisive factor.

Ulster trio, Annadale, Inst and Cookstown all lie in wait to nick second place off Pembroke. The Town look to have it easiest as they host winless Cork Harlequins. The Tyrone side picked up back-to-back Ulster Premier league titles last Saturday and have skipper Ian Hutchinson back from suspension.

Coolnafranky has not been breached in terms of home defeats this season and odds are it will not be this weekend. Annadale host Instonians in the group’s other game.

In Pool B, Three Rock’s destiny remains in their own hands as they face the two sides above them in the table in the final two rounds of competition. In a repeat of the 1986 Irish Senior Cup final, Rovers play Banbridge with the two club’s veterans playing the warm-up act.

International stars like Willie and Rob Haughton, Dave McAnulty, Liam Canning and Robin Madeley are all lining out with the chance to re-enact the 4-3 thriller from the last time Bann tasted ISC success.

In the IHL game, an array of international attacking talent is on display. Phelie Maguire has been back in Dublin this week after time spent in Palestine with work with Eugene Magee and Mitch Darling also on show.

On Sunday, Cork C of I have the chance to confirm their front-runner status as they host bottom-placed Lisnagarvey while Monkstown will aim to boss their local derby with Fingal.

That game has been moved to UCD to avail of the water-based pitch and increased capacity in the stands. Fingal visit with a couple of injury concerns, including the perennially crocked David Bane.

* On home turf, Three Rock hope to keep up their Leinster title pursuit on course on Sunday when they play YMCA (3pm) at Grange Road while Corinthian can affirm their top five credentials with a win down in Kilkenny (1pm, Saturday).