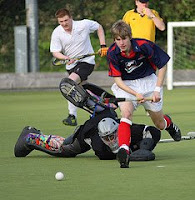 Clontarf 6 (John Lennon, Rob Kelly, Rob Abbott, Richie Forrest, Dan Tracy, Ross McMullen) Suttonians 1 (Conor Gillett)
Harald de Jong’s Clontarf moved to within a win of claiming the division two title as they swept past a Suttonians side coming to grips with playing without Nasir Munir.
John Lennon began the scoring after good work down the right channel before Rob Kelly, Rob Abbott and Richie Forrest made it 4-0 by half-time. Former Weston player Dan Tracey scored on debut in the second half before Ross McMullen completed the rout. Conor Gillett got the sole Suttonians’ response.
It means the Bulls can wrap up the title when they visit Navan next weekend.
Naas 0 Avoca 0
In the race for second place, Avoca dropped two points as they hit a Naas brick-wall, manned by two Leinster greats – Peter Young and Angus Dunlop. They held the visiting hordes at bay to take their fourth point of the season, frustrating Avoca at each turn, culminating in Ezra Handelman’s sin-binning.
Skerries 2 (Paul O’Loughlin, Ronan Gannon) Navan 1 (Simon McKeever)
Skerries stay in the mix after Paul O’Loughlin stepped up five divisions to score a late winner to overturn the result between the sides earlier this term.
Ronan Gannon had put a slightly understrength Skerries-side ahead in the first half, cracking home a penalty corner but young Simon McKeever leveled matters just moments into the second period.
But Skerries were the 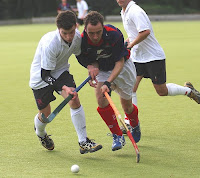 ones to steal the win with regular second teamer O’Loughlin stepping up to get on the end of the impressive Brian McMahon’s second assist of the day. They are now four points off the play-off place with a game in hand on Bray.
Bray 5 (Simon Cox, Phil Davis, Grattan Evans, David Bronner, James Hardiman) Weston 1 (Garvan Drohan)
Bray maintained their place as most likely to take second place and are now the only side, in theory, that can catch Clontarf. They disposed of Weston at home to retain their four point advantage over the chasing pack, though dropped points for Avoca and Suttonians certainly worked in their favour.

Skipper Phil Davis added another to his tally, as did Simon Cox. Grattan Evans got his second of the season while David Bronner got his first gal in the navy-blue.

The next two weekends sees a key fixtures against near rivals Avoca and then the visit of Skerries which will go a long way to determining the final hierarchy.

* For more of Deryck Vincent’s pictures from Clontarf vs Suttonians, click