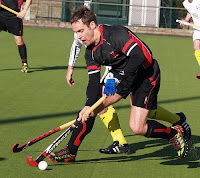 Three Rock’s hopes of retaining the Leinster senior league are now out of their hands as they fell to a 2-2 draw with YMCA at Grange Road today. They led twice but could not shake off a rugged YM side who, after last week’s cup exit, have little left to play for but pride this season.
Garry Ringwood netted an early stroke, following Rovers’ only corner of the game, but Jacob Webber scored a drag-flick to make it 1-1 by the break.
Peter McConnell scored a rebound to restore the lead but David Robinson pegged Rovers once more when he slid in after Stephen Barry’s (pictured) long run and cross.
Rovers had initially intended to rest players involved in the Leinster squad but injury to Alan Bothwell and Neil Lyons’ sickness meant Mitch Darling, Phelie Maguire and Andy McConnell were included while there was a first appearance for Shane Madeley.
For YM’s part, Mikey Fry was a major name not on team sheet.
Kilkenny 1 (Hugh Kelly) Corinthian 5 (Miles Warren 2, Darren Kimfley 2, Brian Doherty)
Corinthian retook fifth place from Fingal with a comfortable yet scrappy 5-1 win in Kilkenny. The reds built up a 2-0 lead before Kilkenny missed a penalty stroke which may have tightened the game up somewhat but braces from Miles Warren and Darren Kimfley and another goal from the stick of Brian Doherty meant it was a successful away day.
*For more of Emer Keogh’s pictures from the TRR vs YMCA game, click here
Just five remain for Leinster women
Women's Division One: Bray 3 Trinity 1