A result which does a neither side’s playoff hopes much good, Avoca and Dublin Uni are both still technically able to pick up the playoff spot but such an outcome looks beyond both. Irish Senior Cup winner Enda Gallanagh and Scott Wilkie were on target for the Blackrock club while former Corinthian Stu Cinnamond and Bangor’s Ben Hewitt meant honours were shared at Newpark.
Clontarf 6 (Rob Abbott 3, Ciaran McNamara, Tom Noonan, Dan Treacy) Weston 1 (C Adams)
Clontarf moved 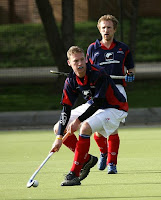 a step closer to the perfect season as they pulled away in the second half against Weston after a tightly contested first half saw the Bulls lead 2-1 at the turnaround. Skipper Ciaran McNamara got the ball rolling while there was a goal against his former club for Dan Treacy. The prolific Rob Abbott netted a hat-trick.
Bray 3 (Cliff Bailey 2, Simon Cox) Skerries 1 (Ali McMahon)
Cliff Bailey made a triumphant return as Bray edged the crucial fixture between second and third place to retake the play-off position they had relinquished just last Thursday night. Bailey hit a double, his first goals since returning from Australia while Simon Cox popped up once again on the score sheet in a vital 3-1 win. Bray hold a one-point advantage over Skerries but still need to outdo their fellow seasiders in their last two games – Trinity and Clontarf – to assure a shot at a return to division one hockey.
Naas 1 (C Hill) Suttonians 3 (Conor Gillette 2, Vikram Singh)
Suttonians are another side with mathematical hopes of a playoff place with three games to play – two against Avoca and one with Trinity – but such an outcome would need all the sides above them to go pointless for the remainder of the season.
They did, however, pick up a comfortable 3-1 victory over Naas to stay in fifth place.
UCD look to bridge 58 year gap: ISC and IJC round-up
Women's Division One: Round-Up