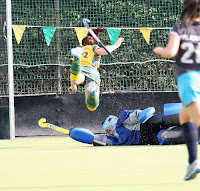 Leinster’s three remaining ISC hopefuls all take to the road this Saturday with difficult ties in Ulster. Division One leaders Railway Union have to bounce back from the agony of cup defeat on penalties in jig-time, making the long trip up to Ballymoney.
Such a fluid side at most times this year, Railway were held scoreless for the first time this season by Hermes in midweek so will aim to buck the trend on Saturday. Money, for their part, have bags of ability at their disposal withe the guile of Lynsey McVicker still in effect, aided by Bridget Cleland. Young tyro Megan Frazer, meanwhile, will hope to get over the exertions for Foyle in the Kate Russell competition in jig-time.
Corinthian go in to UUJ as underdogs despite playing second tier opposition. Ulster Elks scholarship system has seen top internationals Shirley McCay and Emma Clarke sign up along with French woman Philippine Berly and New Zealander Frances Kreft.
The other student team left in contention, UCD, travel to face fellow IHL entrants Belfast Harlequins. Quins are involved in a dog-fight to retain IHL status in Ulster’s Senior One but an impressive win over Pembroke means they cannot be discounted.
The students preferred method of advancement has been via the penalty stroke competition, disposing of Leinster kingpins Loreto and Hermes in such manner.
A shortened division one programme sees Loreto able to put real pressure on Railway’s title bid as they host Glena 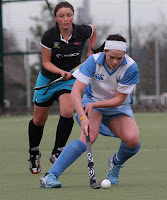