Following the completion of the provincial school’s finals, St Andrew’s boy’s and girl’s and Wesley’s boy’s teams take on the best school’s in Ireland at their respective so-called “Super Sixes” tournaments – the ESB Kate Russell and the recently inaugurated John Waring championships – at Grange Road.

St Andrew’s qualified for the Kate Russell by virtue of their extra-time win in the Leinster Schoolgirl’s cup, beating Loreto, Beaufort 2-0. They go in search of Leinster’s first win in the competition since a Loreto, Bray side featuring Catherine Murray, Linda O’Neill and the Joyce twins back in 2000, conquered.
They are drawn in a three-team pool with Ballymena – the only side in the competition to previously win the competition – and Connacht’s Colaiste Iognaid.
Leinster has two qualifiers for the John Waring competition, the two finalists in last Wednesday’s senior cup final – Wesley and St Andrew’s. The two both contested the All-Ireland School’s final back in Limerick last October and their current series stands at one win a piece.
Wesley are drawn against Munster’s Ashton and 2007 school’s champions Cookstown. The Tyrone side come to town as one of the tournament favourites, winning the Burney Cup two weeks ago in a thrilling 4-3 win over Banbridge Academy. 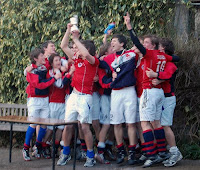 They did so, for the most part, without Irish international David Ames who went off with a shoulder injury. They hope to have him fit for the tournament.
St Andrew’s, meanwhile, begin their double-campaign against Bann before playing Bandon GS.
The tournament format sees each team play two group games on Thursday and then play a game on Friday to determine their placing. The top two from the initial group games go forward to Friday’s finals.
Setanta Sports will be recording four matches and broadcasting them between March 24 to 28.
ESB Kate Russell All-Ireland School Championship(Girls)
Thursday, March 19
St Andrews v Ballymena, 9am; Foyle v Loreto Wexford, 10.30am; Colaiste Iognaid v Ballymena, 12pm; Bandon v Loreto Wexford, 1.30pm; St Andrews v Jesuits, 3pm; Foyle v Bandon, 4.30pm
Friday, March 20
5/6 place play-off,