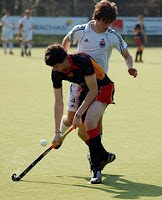 3rd/4th Playoff: Wesley 4 (Carl Eggert 3, Kyle Good) Banbridge 1 (Scott Forbes)
Wesley once again cut loose in the All-Ireland Schools, a result which will once again leave them to rue their off-colour half against Cookstown in the tournament’s opening game.

A superb team move, starting at right-back Rob Anderson went the full length of the pitch for Carl Eggert to get the first of his hat-trick. Kyle Good made it 2-0, taking over penalty-stroke duties from Eggert but the latter doubled up from close range in the second half for an imposing 3-0 advantage.

Scott Forbes netted a corner to pull one back before Eggert completed his triple and claim a bronze medal.

Karl Lynch and Stephen Swanton exchanged goals before Cathal Duggan got the winner in the second half.