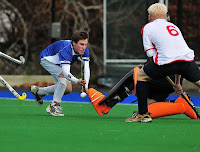 A 19-strong panel has been announced for the Irish u-18 squad ahead of their trip to Nivelles, Belgium on April 15 to 17 as their preparations for the summer’s European competition continues.

Three Rock pair Stephen West and Kyle Good were not considered due to their potential involvement with Three Rock in the EHL while Ryan McCrea is taking a break and Stephen Cole has a major foot injury.

Ian Sloan, meanwhile, will join the travelling party on recommendation from Irish U-16 coach Paul Cooke following outstanding performances in the Burney Cup and the John Waring tournament.

Cooke has allowed Andy Smyth to take a look at Sloan in Belgium – after consultation with the High Performance Director and the player’s parents. The decision has been made early in preparations for this summer’s European competitions so that if the player is not yet ready for the rigours of Ireland U-18, he can go back to Cooke’s U-16 squad with a minimum of disruption.

Speaking about the squad, coach Andy Smyth was keen to stress that those not included for this panel will still have a large part to play in the squad:

“A big part of the role of the JAG coaches is the development of young players. It is for this reason I will be keeping a squad of around 24 players together until after the England series in May.

“Those players who missed out on the Belgium trip WILL get a chance to be seen on the International stage prior to the squad being cut to the final 18 for the Europeans in Vienna.