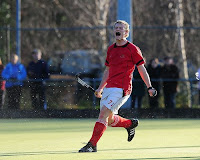 Brian Doherty’s (pictured) fine form at the heart of the Corinthian defence, coupled with a fierce drag-flick, has seen him elevated up to the Ireland A panel, named earlier today.

He is joined by YMCA’s David Robinson who makes his return to the panel after his series of shoulder injuries kept him out of the last squad meet-up back in 2008.

He is one of five Leinster players to be included in a 19-man panel to take part in a triple-header against Belgium’s U-21s between April 7 and 9 in Dublin with Monkstown’s David Fitzgerald and Gareth Watkins along with Pemboke sharp-shooter Alan Sothern also involved.

The squad is coached by Craig Fulton with the players competing for a potential spot in July’s Celtic Cup.

*More details on match times will be posted when available