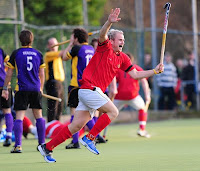 The Zimbabwean tapped in from close-in, rounding off one of the final’s best piece of individual action just 25 seconds into extra-time of a high-tempo affair.
Hard-hitting midfielder Andrew Sutton’s long breakout down the right flank to the baseline was garnished with a delightful feint to entice goalkeeper David Harte a few inches off his line. Sutton duly rolled the ball between the keeper and his near-post to the waiting Rixon-Fuller.

The silver-goal ruling meant seven more fraught minutes needed to be negotiated, especially when Davy Carson was sin-binned for protesting. Brian Doherty charged down an Alan Sothern corner as Pembroke laid siege to the Corinthian goal.

They camped in opposition territory – as they had done for long periods of the second half – but could create little in the way of goalmouth openings. Indeed, the reds had the better chances to close the game out with Darren Kimfley hitting the side-netting twice.

Early on, Pembroke – who included Scott Furlong from the start after Ronan Gormley was unable to play due to work commitments in Manchester – had taken the lead when Alan Sothern netted a drag-flick in the 15th minute. With Conor Harte in the sin-bin, Doherty equalised in similar fashion from Corinthian’s first corner seven minutes before the break and the Ireland A squad member was instrumental in putting his side ahead.

Again from a corner, he dragged low for Andrew Cronje to slide in and deflect over David Harte.

Pembroke pressed forward at high speed to rein in the deficit, 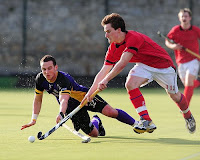 The Corinthian player-coach had a fractious afternoon all round against his former club mates, starting with a first minute dust-up with Conor Harte.

He was yellow-carded for not retreating quickly enough. Cronje, the lynch-pin in the Corinthian defence, followed him to the sidelines two minutes later with a second recurrence of cramp. He had been out injured since early February but his departure left the embattled side missing two strong leaders on the park.

Sothern duly leveled to force extra-time with yet another drag-flick but within minutes Corinthian had the vital goal to pick up their first senior title since 2005, when they also needed extra-time to gain the Mills Cup.

Chris Pelow continued his rich vein of form, seemingly impossible to tackle at times with the ball at the end of his stick, his marauding runs were a constant menace.

It gives tangible reward to a side on the up since last December after a tricky opening to the season. The turning point for the multi-cultural side came when South African internationals Cronje and Kimfley joined the club.

And co-coach Peter Darley said the experience of Cronje was needed to help develop a young side.

“People misunderstand the Corinthians thing when they see a couple of overseas guys going in. They miss the fact that you have the likes of Conor Motyer, David Carson, Brian Doherty, even Chris Pelow. They’re young enough and Andy kind of knits that together for us. He’s got that little bit of experience.”

Since the pairs arrival, the club have jumped back into contention for an Irish Hockey League qualifying place, though th 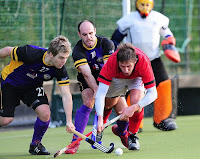 at issue took a mighty blow on the morning of the game.

Mere hours before tip-off, the Leinster Hockey website announced a three-point penalty for the Reds for playing an unregistered player against Fingal on December 13 – the first game Kimfley and Cronje played for the club.

* For Adrian Boehm and John Keogh’s pictures of the action, click here while Stephen West’s photos of the game can be seen here.