the Tyrone side become the inaugural John Waring champions as they produced a complete performances to gain revenge over St Andrew’s.

But it was a different the story in the ‘super-sixes’ as the Tyrone school –inspired by Stuart Smyth and David Best – netted two first half goals and never looked back to record a handsome 2-0 victory.

The manner of victory, though, was something to behold. Town impressed in all areas, through the trickery of Ian Sloan, the direct and forceful running of player-of-the-match Stuart Smyth to the impenetrable defending of David Best, the performance had it all.

Both sides went into the tie missing big-hitters. Irish senior international David Ames missed out for Cookstown with an elbow injury sustained in the Ulster final against Banbridge two weeks ago while underage international Stephen Cole was marked absent due to an open fracture in his foot.

It meant a midfield reshuffle for Andrew’s and they never truly got to grips with the mix of aggression and guile supplied by Stephen Sloan – one of two sons of Irish legend Marty on show.

Town hit the front early on when Smyth’s audacious overhead from a long corner found Mark Wilson unmarked on the back post. His effort was blocked by Stephen West but the rebound was cleared deliberately over the end line, resulting in the game’s first penalty corner.

Ian Sloan set up his brother Stephen to slam home, via a slight deflection. Smyth was delivering a master class by the time he netted the second. His disguised reverse pass fed Mark Crooks and the flying winger beat two defenders on the end line, returned the favour to Smyth and he swept home forcefully from just six yards out. 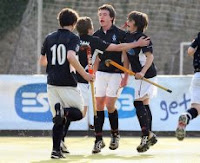 Davy Carson – depsite suffering from illness during the week – was showing plenty of menace at the other end, latching onto Richard Sykes’ long clearances out of the Andrew’s defence and Alister Thom was called on a couple of times to deny the danger but as the game wore on, such chances proved more and more sporadic.

And after the break Cookstown were never truly threatened, using their tight-knit passing game to camp in the Andrew’s half while Best gave a sweeping master-class to mop up any loose balls.

It means the inaugural title heads north – the 2007 All-Ireland school’s champions adding yet another to the town’s recent list of accolades.