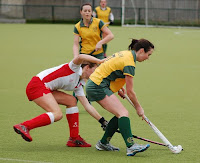 Railway Union have a chance to progress both their league and cup ambitions with a double weekend, a trip to Corinthian on Saturday followed by a home cup tie with UCD.

Their game with Corinthian will be their first away league match since November, though in the early stages of the season away trips proved their forte with four wins from four and all with clean-sheets.
They have started playing a more expansive game in more recent times but with the same net affect and are one of the country’s form sides with Jean McDonnell slamming in five goals in her last two games while the quiet centre-midfield work of Sinead Walsh perfectly offsets the attacking verve of Emma Smyth.
Their Sunday cup game gets underway at 4.45pm due to the involvement of UCD duo Lisa Jacob and Roisin Flinn in the Irish training camp – the same reason which saw Loreto’s fixture with Old Alex brought forward to Wednesday night. The Belfielders are hopeful of having Megan Tenant-Humphreys back in their line-up for the game.
The other cup semi-final sees surprise package Bray hoping to get into a first-ever Jacqui Potter Cup final against Hermes. Their stunning penalty win over Loreto in the quarter-finals will obviously provide belief while Mary Goode will hope to repeat some of her fine work from last week’s game against Hermes.
The Booterstown raced into a 4-0 half-time lead that day but Cheryl O’Toole’s effort mean the Wicklow-side won the second half and will hope to reproduce that form.
Trinity, meanwhile, will hope to wake up the fresher for their 11am tip-off in Santry against Pembroke. The students drew plenty of positives from their 2-2 draw at Serpentine Avenue earlier in the season with Rachel Scott starring against her former club.
The early start was arranged to make sure David Bane could double-up his coaching responsiblities with playing for Fingal’s men. His side are at full strength bar former High School student Christine Boyle whose ankle injury keeps her out.
Division One (Saturday): Corinthian v Railway Union, 2.30pm, Whitechurch; Trinity v Pembroke, 11am, Santry
Jacqui Potter Cup (Sunday) – semi-finals: Railway Union v UCD, 4.45pm, Park Ave; Bray v Hermes, 4pm, Bray
Men's Leinster weekend preview
Irish Cup previews