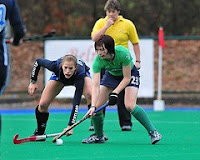 Loreto won by a single goal in the first half to exert yet more pressure on league leaders Railway union. Niamh Small (Pictured in Ireland action) bagged the solitary strike to move the Beaufort club to within a point of top spot, though they have played two games extra, to add psychological pressure to a side going in search of a first ever division one title.
The game was also notable as probably the last appearance, for the time-being at least, of Lesle-Ann George. She returns to South Africa to resume her studies after three months with Alex.
Ask Ray O'Connor… week two
Leinster Schoolboy cups reach business end