The Venezuelan international thought he had won the game for Rovers with a golden goal three minutes earlier when he first-timed home Mitch Darling’s cross but the ball was adjudged to have been slapped.

However, Piccioli was not to be denied a second time , finishing off a late thrust through the YM midfield before beating Iain Walker from the top of the D. It gives Rovers the perfect tonic ahead of their European Club Champion’s Challenge next week in Cambrai, France.

As reigning Tony Byrne Cup champions in 2008, the Rathfarnham club is Ireland’s representatives in European indoor hockey competition and Sunday’s win means they will repeat the journey in the 2009/10 season.

Earlier in the game, YM had fought back from a 3-1 deficit with two goals in the 35th minute. The old master Liam Canning scored a double while current Irish international Andy McConnell got a tidy short corner deflection to build up the lead – Graham O’Neill’s first YM goal the sole response.

fire strikes put the sides back on terms. First, Will Powderly showed incredible persistence to scramble past Shane Davey under severe duress.
Australian import Jacob Webber followed up with a perfect drag-flick 45 seconds later and the game was tied up.
The first period of extra-time saw lots of running but little goal-mouth action as neither side could apply the finesse needed to nick a winner. Rovers, though, finished the stronger for Piccioli and claim their second Indoor league title.
YM proved the surprise package, qualifying for the last four despite just one win in their first three group games last week. However, a 4-1 win over Avoca and an excellent semi-final win over Corinthian gave them a surprise final berth.

David Robinson was the star of that performance, turning the game on its head with two strikes. Andrew Sutton leveled for the reds at 3-3 but ace strike Webber netted his seventh goal of the tournament to decide the tie. 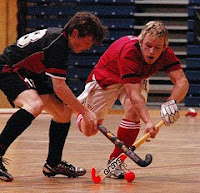 Rovers had an easier route to the final, ousting Monkstown in a repeat of last year’s final 5-3.