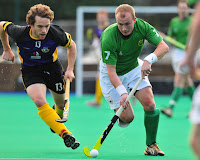 The cancelled interpros mean Glenanne can have full usage of Jonathon Kane and Leinster U-21 captain Richie Shaw for what could be a pivotal weekend in the race for domestic honours.

The pair are back in the squad with the match confirmed as a Saturday game after thoughts earlier this week of moving the game to Sunday to give the grounds an extra day to thaw.

Pembroke won last time out in spite of Craig Fulton’s first half red card but the Glens have become a much tougher prospect in recent weeks. Pembroke are not in bad form either and are the only side in Leinster to stretch their legs outdoors last weekend with an impressive win in Garryduff.

Elsewhere, Kilkenny face a number of their alumni at ALSAA this weekend as they play Fingal. Derek O’Gorman, Nigel Grothier, Emmet Hughes and Brian Gray are among former Cats now plying their trade at the airport. The current crop need a win to clear themselves of bottom-placed UCD, who have the weekend off.

Fingal, along with Monkstown, have the chance to bounce back into the top five ahead of Corinthian. They have the weekend off due to their four players due to play for Leinster U-21s.

The final game up for decision is Railway’s hosting of Monkstown. The Town are at full strength while Railway continue to be without Kevin O’Brien due to Irish cricket commitments.

In division two, the chasing pack have a chance to close the gap on Clontarf. Suttonians, though, will hope not to carry their midweek form into their game at Bray. Nasir Munir’s side lost 4-0 to his former char

ges Trinity in the Neville Davin Cup – with Aengus Stanley scoring his first ever goal on the night (picture, left, by Jessica Pakenham-Money).

A win for Suttonians would continue their great response to losing Yasir Islam and Mukhtar Ahmed and have them right in contention for the playoff place. Skerries will maintain that position, though, should they beat Naas.

Trinity travel to play Navan to Sportlink – though their Santry home is just down the road means the students face probably the shorter trip to the game. Avoca, meanwhile, make their way to Griffeen to face Weston.