The February cold snap meant that just three of the 16 scheduled Irish Senior Cup matches took place today while Trinity and Bray’s Women’s division one tie was also off today.

Garryduff saw the only men’s game with Pembroke getting the better of Cork C of I 2-1 thanks to goals from Maurice Elliott and Alan Giles either side of the half-time whistle. Jonny Bruton pulled one back with a wonder strike in the last 60 seconds but, in truth, Pembroke were good value for the victory.
Ronan Gormley and Paddy Conlon controlled the midfield battle in the face of David Hobbs and John Jermyn while Tim Lewis and Conor Harte’s long game gave the ‘Broke a constant threat.
Indeed, their dominance was emphasised by CI being unable to win a single corner to Pembroke’s half-dozen. From an early one, Alan Sothern drew a great save from Mark Ruddle.
But Pembroke hit the front on 27 minutes when a long ball out of defence was allowed to run right through to Gordon Elliott, who squared for Maurice Elliott to force it over the line from close range.
They doubled the lead 17 minutes after the break – with Bruton in the sin-bin – when skipper Alan Giles rebounded after Conor Harte’s first phase flick was saved. 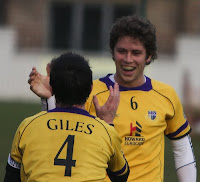 Back in action, Bruton blasted in reverse but the holders progressed, becoming the only side tonight to have a quarter-final place.
The women’s side of the competition saw twice the amount of games – it still meant that three quarters of fixtures were off, though.
Reigning champs Pegasus made it through thanks to goals from former international Arlene Boyles, Fiona McIlwaine and Hannah Clarke to dispose of fellow IHL side Randalstown. Development player Rebecca Dallas got one for Town in a 3-1 defeat.
The Ulster Elks join Pegasus in the quarter-final draw with a 5-2 win over Lisnagarvey with New Zealand international Frances Kreft getting hat-trick. Emma Clarke was also on target.
Men’s Irish Senior Cup
Cork C of I 1 (Johnny Bruton) Pembroke 2 (Maurice Elliott, Alan Giles)
Women’s Irish Senior Cup
Randalstown 1 (Rebecca Dallas) Pegasus 3 (Arlene Boyles, Fiona McIlwaine, Hannah Clarke); Ulster Elks 5 (Frances Kreft 3, Emma Clarke, Louise Wright) Lisnagarvey 2 (Lauren Wilson, Nicola Jess)
* If you’re missing your hockey fix for this week, click here to see some more action from last week’s games
Hong Kong beckons for Irish Masters
Favourites still on track in Leinster school's cups