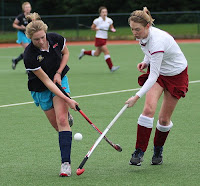 While the women’s division one title-race has taken on a little bit of a one-sided look in recent weeks, there are plenty of close-run battles right the way down the women’s leagues. Here’s a brief synopsis of whats going on in divisions two to thirteen. Division 14 is being headed by Monkstown who are unbeaten but due to a lack of other results, I’m unsure of what the full state of play is in that one.
Women’s Division Two

An ultra-competitive division two has been beset by all manner of postponements due to the weather and the newly formed Irish Hockey Trophy leaving it hard to read much into the mid-season table with Genesis, for example, left with 13 games to play after Christmas. They are unbeaten after five games but will have to play a lot of double-weekends to catch up. Three Rock Ladies are another unbeaten side with three games in hand over table-topping Loreto II and two on Alec Barrett’s Railway Union IIs. All are still involved in a fascinating battle.

The top seven are all within three points of each other while the whole division has just a six-point stretch meaning its not inconceivable for bottom trio, Avoca UCD II and Genesis II could make a charge for the title. They enjoy games in hand on their rivals and could well threaten Suttonians and Corinthian II. The latter have bounced back well from a horror season last time around to hold onto second place.

Muckross lead the way in division four thanks to their win over Weston before Christmas in the top of the table battle while the club also is on a high after a decent cup run in the IHT. Rowland Rixon-Fuller’s side is top of the division by three points ahead of the Lucanites with the rest of the table just out of striking distance. Newbridge could yet break from the pack and have been buoyed by the news that plans are in place for them to build an Astroturf pitch in their area.

Naas’ impressive away form has seen them zoom clear of the table after eight games. Four wins from four on the road has helped build a five point lead over Old Alex III with Guinness a point further back. Railway Union’s IIIs could get back into the race as they have yet to play on home turf and have two games in hand.

Another tight league with four points covering the top six and the postponements due to the cold snap meaning lots of teams are still involved. Navan lead the way but have played only once away from home this term, North Kildare II are second equal with Genesis III and UCD III all one point off the Meath-side.

Botanic IIs will hope their new pitch can work wonders for them when it opens for business early in the New Year. The Glasnevin outfit has played just once at home this season and will hope to use that to their advantage to reel in the seven points gap to leaders Bray III. The Wicklow women have played two games more. Skerries II are also in contention though have been hampered by a one point suspension for an incorrectly registered player.

Dalkey’s first team lead the way but a recent defeat to second placed Suttonians II means their Christmas advantage was reduced to just a point. Clontarf IIIs have also closed the gap while Phoenix Park will be looking to continue their rapid ascent through the leagues in recent years. 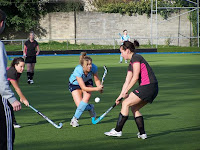 in Leinster women’s hockey meet head to head in Claremont Road as YMCA host Malahide. Both were promoted from division ten last year and look on course to do so again this term. Malahide also welcomed a new astro at Broomfield in the lead up to Christmas and have gone seven from seven. YM, who have been promoted in every year since they began a female section, have six wins from six.

Old Alex V, Genesis VI and Trinity IV look set to slug it out in the second half of the season as just two points covers the leading trio after seven games. Swords II and Bray IV could also narrow the gap were they to win their back matches.

Unbeaten Avoca IIs have built up a healthy six point lead in this eight-team league thus making them favourites to take the divisional crown. Just two goals conceded in seven games so far have seen them ease clear of the pack at the half-way stage.

Naas IIIs 100pc record sees them tie for top spot with Mullingar on 15 points, though the former have an extra-game to play in the second half of the season that could prove crucial. Naas won 2-0 when the sides played at Forenaughts back in November but a reverse in Westmeath would open the race up completely.

Newbridge IVs hold a commanding ten-point gap over the rest of the field after 100pc start after eight games. Old Alex VI and Trinity V are dueling for the second promotion place.