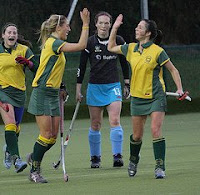 Railway took advantage of Loreto’s loss to Pembroke to build up a nine-point lead in division one and make the title theirs to lose after impressing once again in a 3-1 win over reigning champions Hermes.

Jean McDonnell’s pace opened up the first serious chance inside 15 minutes but her fierce drive when one-on-one with Emma Grey flashed wide. Her side did not have long to wait for the lead, though, as Kate McKenna batted in a rebound a few minutes later for a 1-0 half-time lead.

McKenna drew an outstanding diving glove save out of Grey early in the second half before McDonnell made it 2-0. She capitalised on Aoife McCarthy’s mistake on half-way to race onto the loose ball. She seemed to have been forced too far wide by the Hermes goalkeeper but, on her knees on the endline, swept a reverse into the net.

Hermes, though, got back into the game after Chloe Watkins virtuoso run down the left baseline. Her pass drifted across goal, over Helen Stevenson, where Anna O’Flanagan – who was the Booterstown side’s leading light – retrieved the ball. Her initial strike was blocked down but rebounded to Christine Quinlan to batter home off the inside of the post.

It came with 16 minutes remaining, at a time when Hermes were the dominant side. O’Flanagan saw Stevenson make a double save while a couple of chances fell Jenny Burke’s way.

But Emma Smyth scored a cracker to seal the tie. She played a huge part in its creation too, combining with left-back Isobel Joyce – another who was outstanding throughout. Joyce stole the ball near the halfway, beat a couple of players and exchanged a pass with Smyth.

Her searching ball to the endline was returned in kind by Cecelia Joyce and the midfielder slammed home from a tight angle to complete a league double over Hermes.

Loreto 1 (Nikki Keegan) Pembroke 2 (Louisa Moore 2)
Two Louisa Moore goals against the run of play in the first half saw Loreto lose vital ground on Railway and possibly end their chances of the title. The Beaufort hosts held most of the possession and had the majority of chances but could not break Pembroke down for whom Jane Coyne pulled off some top saves and Orla Fox was also impressive.

Both of Moore’s goals came in the second phase, driving cricket-style for the first in the eighth minute and getting the second toward the end of the first half. Cathy McKean nearly reduced the deficit early in the second half, flashing wide while Loreto also failed to score from several corners.
Nikki Keegan did pull one back in a particularly rocky patch for Pembroke, after McKean’s left-wing incision. Niamh Small went close to another stunning effort, beating two before unleashing an aerial but Coyne dived with her stick to deflect around the post.
The Broke had sporadic breaks led by Moore and Hilda Maguire – the former almost stealing in for a hat-trick – but Loreto closed stronger but could not force a leveller.
* Pictures from Railway v Hermes courtesy of Deryck Vincent, click here
IHA announce U-16 Provincial blitz
Men's Division One: Week Eleven results