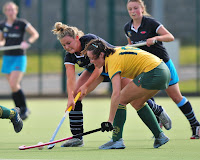 Railway go into this weekend knowing a win over bottom-placed Trinity will guarantee a six-point buffer at the halfway stage in the season. Their regular fluid attacking game, though, was knocked slightly off rhythm by Corinthian last night and Trinity have shown a lot more bite in recent weeks, leading this to be a potential banana-skin.

Loreto’s trip to Glenanne has a similar feel as the Tallaght-women look to make a charge for IHL qualification. Hermes, meanwhile, desperately need a win to keep any title hopes alive. Last season they came from a similar position from way back in the pack to claim the title.

The mixture of young and old has taken a little while to gel but showed signs of coming together in last weekend’s cracker with Loreto. Last season, though, with a huge amount of draws between the top sides, Hermes had not given the others so much of a headstart. They need a win to make their match on December 20 a meaningful one.
Alex, meanwhile, have two away trips in three days which could see them well in contention. Wins over Corinthian – themselves set to play three in five days – and Bra