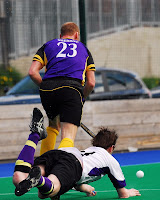 All on Sunday
Cookstown v Annadale, 2.30pm, Coolnafranky (Colin Hutchinson, Kieran Bolger)The most contorversial of the refixes, Annadale will hope to recreate the form that saw them lead 4-1 in the third quarter and on course for a bonus point. Cookstown are without Thomas Hutchinson with a broken finger as well as Stuart Smyth. Keith Black and Andy Barbour are back, though. For Annadale, Ulster U-18 Peter Purcell and Irish international Jonny Quigley are both out. In an odd twist of fate, the sides play each other twice in 24 hours at the same venue at the same tip-off time as the pair meet in Ulster league action on Saturday.

Pembroke’s postponed match against UCD means they can rest up on Saturday or take in Inst’s match with Lisnagarvey in Shawsbridge a day before their tie. The big team news is the return of Mark Gleghorne after a lengthy injury though this is offset by Julian Lewis and Mark Wainwright not being available. Pembroke, meanwhile, suffered a blip in midweek against Corinthian but Alan Sothern continues to rattle in the goals. A rematch of last year’s ISC quarter-final 4-3 nail-biter. There is also an outside chance of a return for Justin Sherriff who played seconds last weekend in a 3-3 draw with Monkstown.

Fingal v Three Rock Rovers, 1pm, ALSAA (Simon MacAllister, Dan Clarke)Fingal will hope injuries to Paddy Gahan and – once again – David Bane clear up in time for the visit of Rovers while Ben Chillingworth is a long-term absentee. They face a Rovers’ side with a few problems of their own but Peter Blakeney, Neil Lyons and Mick Maguire have all been included in an initial squad of 19 for this weekend after missing out recently. The list also includes three goalkeepers – Charlie Henderson, Wendel Armstrong and the Apprentice fifth place finisher, Shane Davey.

Monkstown v Lisnagarvey, 3pm, Rathdown (Andrew Groves, Kris Cholewa)Monkstown face a full-strength Lisnagarvey side at Rathdown on Sunday in a fixture gaining in history and intrigue. Last season’s cup semi-final was one of the most famous in the Town’s history and they started brightly in the IHL match before players started sliding all over the place. The Town also laid on a good spread last time, sponsored by KBC Asset Management with an impromptu covered stand, hot food and a 20-page colour programme.