Skerries and north-side rivals Clontarf have set up a key game in the first round of league matches in the New Year with a 3-0 win over the other side in the mix, Bray. Alan Early bagged another pair – deflecting home Ronan Gannon’s shot for his second – while German exchange student Felix Nacken was also on the mark.
Weston 2 Clontarf 6 (Andrew Poynter 3, Tom Noonan 3)
After a strange week for Clontarf, they notch up three points against Weston but find they may yet have to replay from scratch 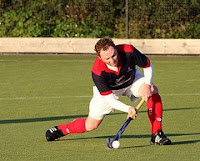 their tie with Navan as a review will take place of last week’s events.
Andrew Poynter (pictured) got Tarf’s first two, linking well with Tom Noonan before Weston got one back. Derek Ledwidge assisted for Noonan’s first to restore the advantage but Weston got back in it soon after.
Noonan’s deft touch from Luke Hayden’s cross, though, was the clincher. Poynter made it 5-2 with three minutes left and Noonan got the last Tarf touch before the ball went onto the post and bounced out only to be unfortunately knocked back into the goal by the Weston keeper.
Dublin Uni 2 (Jason Bryan, Ben Hewitt) Avoca 1 (Stephen Brownlow)
The students picked up their second win of the season with goals coming from the pair whose strikes last week against Naas may just be consigned to academia, former Trinity captains Jason Bryan and Ben Hewitt.
Men's Division One: Week Ten results
Women's Division One: Week Ten results