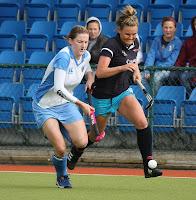 For the third time this week, the balance of power in the Leinster title race will be put to the test with the quartet of title contenders locking horns thisweekend.
First plays second at Park Avenue as Loreto and their quintet of internationals will hope to put a dent in Railway’s title hopes while the two sides tied for third spot, Hermes and UCD meet up for the second time in a couple of weeks.
Railway took pole-position in midweek thanks to Jean McDonnell’s goal, though Mary Logue was pleased with the students’ performance against Leinster’s pace-setters, coming off the back of eight games in nine days. 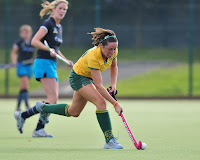 She feels the side has progressed quickly and in Lisa Jacob have a livewire upfront that could cause some damage this weekend against the youthfulAll-Ireland champions, Hermes. The game will give Logue an instant chance to see how far the side has come,having already played Hermes in the Irish Hockey league.

Liz McInerney will return for the Belfield-side on Saturday, recovering from a bruised foot, to play her former club. Leigh Pelow, though, may miss out after receiving a ball to the chin on Wednesday.
That result means Mick McKinnon’s Railway go into the weekend four points clear of Loreto with Hermes and UCD a point further back. 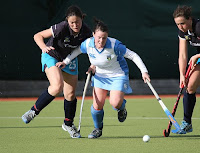 Loreto should provide the toughest test yet for his side. They come into the fixture in a rich vein of from, scoring 21 times in their past four games andhave internationals Nikki Symmons, Niamh Small, Cathy McKean, Louisa Healy and Lizzie Colvin all available.

There are also crucial battles at the bottom of the table. Corinthian and Trinity will hope to get off the mark as they face the sides just clear of the relegation zone – Bray and Glenanne respectively.