Glenanne’s Mary Waldron (pictured, right) starred on Saturday night in the women’s Umbro FAI Cup final at Richmond Park, scoring the winning penalty in injury time for St Francis to beat a side from just half a mile down the road from their base in West Dublin, Peamout United, 2-1.

The win created a unique double for an Irish club. The Saints men were the first non-league side to win the men’s FAI Senior Cup back in 1990 and the ladies have now followed suit but will take their place in the DWSL Premier A league next season having recently gained promotion. The club’s womens se 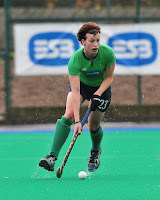 ction was only founded two seasons ago.

Winger Niamh Small (Loreto, left), however, was unable to take part on cup final night as she was involved with the Irish national team in their series with Scotland.

They are part of a number of ‘dual-stars’ with Hermes’ young duo, among others, of Deirdre Duke and Gillian Pinder also excelling with soccer clubs in the DWSL.
*Picture courtesy of FAI/John Barrington and Adrian Boehm
Jacqui Potter Cup: Round Two results
Men's Division One: TRR 3 Monkstown 1