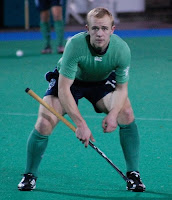 Ireland 3 (John Jermyn 2, Timmy Cockram) Scotland 1 (Kenny Bain)
In front of the watching Paul Revington, Ireland held their nerve to overcome an ill-disciplined Scotland, scoring two goals in three minutes while the visitors were down to nine men.

The Irish looked a bit over eager in the opening stages with elaborate touches overcooking what should have been simple passes. The earliest chance just evaded Eugene Magee’s stick as Mitch Darling’s free flashed across the goal.

Michael Christie’s cross followed a similar route at the other end while Timmy Cockram had Ireland’s clearest opening but miscontrolled Magee’s wonderful through ball after a superb bit of skill on the right touchline. Playing on his home turf, Magee was the standout forward of the game.

Meanwhile, Fergus Dunne had a clear opening, capitalisng on an uncharacteristic fumble by Tim Lewis but could not get a shot away when going one-on-one with David Harte. But it was an omen of what was to come as Ireland conceded a very sloppy goal in the 32nd minute.

Iain Scholefield 60metre ball down the left channel looked more in hope than expectation but found an unattended Kenny Bain. Unchallenged, Bain strode in the circle and placed a reverse under Harte without a defender in sight.

By contrast, the second half saw a more polished performance. John Jermyn levelled three minutes into the half from a corner after Magee had run onto David Hobbs cheeky backdoor pass.

Scotland lashed two corners wide before they imploded. A supposed friendly, four green cards were dished out before Scotland took tow yellows in the one incident. Phelie Maguire was tripped, when lining up a reverse, by William Marshall for a stroke and the first card.

Skipper Niall Stott was overzealous in his complaints and a few seconds later he followed to the technical area where it looked as if a stray remark may have been thrown at the TDs with Dixon Rose emerging from his box to exchange a couple of words.

Jermyn netted and within three minutes Cockram had planted home a switched corner, won by Geoff McCabe – another local boy producing one of his better outings in green.

Scotland had a couple of late half-chances when back to full compliment but Ireland controlled the game well with Joe Brennan marshalling the defence well.