A much changed Irish outfit produced a third win in three days over Scotland as Paul Revington caught a glimpse of the wider pool of talent available to him. A virtual second string outfit took the field on Sunday at Havelock Park with only Karl Burns and Eugene Magee having a wealth of experience under their belts.

The game itself had been recategorised as a capped match on request from Scotland having initially been billed as an uncapped game which meant debuts for Cookstown’s Colin Donaldson, Mossley’s Simon Todd and C of I’s Johnny Bruton. 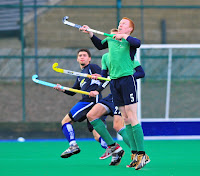 minute drag-flick to give Ireland a 1-0, held in tact by Mark Ruddle’s save from Niall Stott’s drag-flick and Johnny Jackson’s goal line clearance until William Marshall levelled right on the stroke of half-time.

Jonny Bruton, though, made it a debut to remember when he netted the winner in the 54th minute from a move instigated by Mikey Watt and Sothern.

The game became increasingly scrappy thereafter, with Geoff McCabe and Adam Pritchard both sent to the bin, preluding a number of corners before Stott picked up his second yellow of the weekend, easing the pressure in the closing stages.