Glenanne moved into back the top three thanks to a strong second half performance after YM had taken an early lead through Jacob Webber. The Glens levelled by half-time and then pulled clear with three second half goals to stay within a couple of points of new leaders Three Rock.
Pembroke Wanderers 10 (Alan Sothern 4, Michael O’Connor 2, Gordon Elliott, Conor Harte, Alan Giles, Florian Richter) Kilkenny 1 (Tom Manning)
Pembroke notched up the biggest win of the season with a comprehensive hammering of the Cats at Serpentine Av 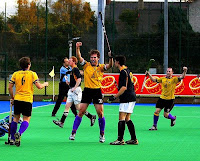 enue. Alan Sothern leads the way in the goal-scoring stakes thanks to his four on the day while Kilkenny will hope they can turn their form around as they face a crunch match against UCD next Saturday. 30 goals have already been conceded this term in seven games, a worrying sign.

The Town have gained a valuable buffer of five points in the race for an IHL place as they beat sixth-placed Corinthian by the odd goal in three. Watkins opened the scoring after creating space himself to fire in a reverse before Alan Lewis made it 2-0 with a deflection. John McInroy levelled with a slightly deflected effort with about 10 minutes remaining but they could not create enough chances to pick up a point.
Fingal 1 (Mick McGuinness) Three Rock Rovers 2 (Peter Blakeney, Pat

rick Shanahan)
The top of the table now has a lot more familiar look as Three Rock Rovers won a decent game in ALSAA. Goals from Peter Blakeney with a reverse to open the scoring and Patrick Shanahan sealed the win to leap-frog Fingal who now occupy a three-way tie for second place with Glenanne and Pembroke but lie fourth on goal-difference.