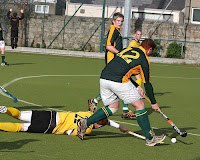 While the IHL shifts the focus away from domestic action for most this weekend, the Leinster leagues throw up a few fascinating fixtures, mostly in the race to avoid relegation.
In men’s division one, UCD will hope they can build on the point they picked up last week down in Kilkenny against a Railway side that have been out of action for three weeks. The students need to find some scoring form as, bar the Pembroke game and the last 12 minutes against Rovers, their defence has been quite tight in the league.
Railway, meanwhile, will have their close skills ratcheted up a notch after an indoor weekend in Prague and the buzz of their quintet of U-16 stars taking the interpro title for Leinster.
The women’s side also has four sides from the lower half of division one in action though Old Alex, with Arul Anthoni on the sideline, could move into second with a win at Corinthian. The reds, though, are a side on the up after a horror start to the season and could provide a shock.
Elsewhere, the two promoted sides meet for the second time this season. The last time out, the Glens were denied by Elaine Brommel’s last second corner strike from taking all three points.
In men’s division two, after performing cup heroics, Suttonians will hope to get their league campaign back on track against Naas.