Bray battled hard against Pembroke as old team-mates a plenty faced off at Serpentine Avenue. The ‘Broke were dominant in the early stages with Louisa Moore bashing in two huge short corner hits for a 2-0 lead and Hilda Maguire got a good field goal early in the second half. A well-worked corner gave Bray a chance and they enjoyed a lot of possession in the closing stages but to no avail.
Hermes 8 (Nicola Evans 2, Jenny Kinch 2, Christine Quinlan 2, Chloe Watkins, Gillian Pinder) Trinity 2 (Danielle Costigan, Lucy Small)
A facile win for Hermes, bouncing back nicely after their loss to Railway. They opened up a 5-0 lead by the break before taking their foot off the gas. First senior league goals for teen 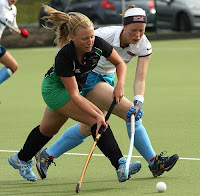 agers Chloe Watkins and Gillian Pinder while Christine Quinlan got her first pair since her return to the club.
UCD 1 (Rachel Burke) Loreto 1 (Lizzie Colvin)
Former Armagh player Lizzie Colvin got her first goal for Loreto but it was not quite enough for victory against the students as Rachel Burke nabbed an equaliser three minutes from time. Colvin’s goal came from a corner move, her effort leaving Stella Davis helpless as the ball looped over her head. But Burke’s late strike means Loreto settle for a second successive draw.
Old Alex 0 Railway Union 4 (Jean McDonnell 2, Sinead Walsh, Kate McKenna)
Railway maintain their perfect start to the season – the only side with two wins from two so far – and ahve yet to concede a goal. They were made to work hard by Alex who limited Railway to just one goal in 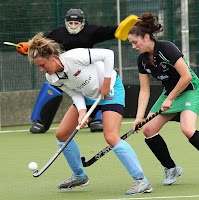 the first half before running in three more after the break. Next up are Glenanne in a battle of the current top two.
Corinthian 0 Glenanne 2 (Leah Spillane 2)

Glenanne’s impressive return to division one continues apace as they picked up an away win over Corinthian thanks to two Leah Spillane goals from short corners. Both came in the second half to seal the win, adding to their draw with Bray and cup win over Pembroke and they now sit in second place, level with Pembroke.