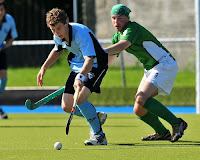 In a quiet weekend of hockey around Leinster, only men’s division one and three see much action this weekend while there are only two ladies matches, all told.

On the men’s side, there are two high profile matches with Glenanne hosting Monkstown and Fingal welcoming Pembroke to ALSAA – all four coming off the back of IHL experiences last time out.

The corresponding fixture last season saw an understrength Glens – due to the international players enforced rest period – lose to an inspired Town effort. The loss effectively ended their title bid so a modicum of revenge may be on their minds. Since then, the sides have met in the Neville Cup. That one went Glenanne’s way in Rathdown 3-2 while a preseason friendly saw the Town go 3-0 up before losing 4-3. Basically, expect a tight and exciting match.

Both sides can pick their international stars for the game as the Irish Super Camp gets underway on Saturday evening.

Fingal, meanwhile, host Pembroke at the airport. Both are unbeaten locally this season with Pembroke seemingly warming up to the season after a serious lack of fixtures. Their win over Harlequins has them in decent shape and Alan Sothern has scored in every game so far. For Fingal, Adrian Sweeney has acheived the same feat.

YMCA’s tie with UCD – after a bit of debate over its rearrangement – have had their game postponed due to the intervarsities and the students potentially playing seven games in four days. Varsities gets underway in Kilkenny on Sunday.

Both teams initially agreed to postpone the fixture but the date offered in its place fell outside the Leinster Branch’s 15-day rule for refixes. As a result, the date has been set at November 4.

Railway will look to get off the mark against Corinthian, though both clubs may be slightly affected by the involvement of junior players in the All-Ireland schools. Corinthian have shown some good improvements of late. Railway, for their part, have fought well against Three Rock and Glenanne for little reward and will need to summon that energy to pick up points this weekend.

On the women’s side, the big match is at Serpentine Avenue with two of last season’s title contenders go head-to-head. Just a point separates the two sides currently and both were IHL winners last weekend. Loreto host Scott Crombie’s Corinthian side at Beaufort.