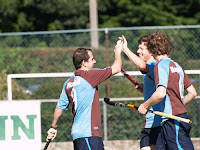 Three Rock Rovers take on Europe’s finest this weekend with one of the toughest draws in the Euro Hockey League, facing the Belgian champions KHC Leuven and Spanish league leaders ONO Atletic Terrassa.

Both opponents have brought in a number of players from home and abroad to strengthen their squads this year; something which Rovers’ coach Turloch O’Siochain believes may need to be done for Irish clubs if they hope to challenge the continents best.

The introduction of the EHL and the prize money on offer has raised the stakes for club hockey in the continent with many clubs hoping to get on the gravy train, especially when you see that the entire Argentinean squad that visits this week is European-based.

Terrassa – Rovers’ opponent on Friday afternoon – have made one of the most eye-catching signings, bringing in German Olympic gold-medalist Matthias Witthaus from Crefelder. He is joined by compatriot, Jonas Furste, who won the inaugural EHL title with Uhlenhorster last season.

Their inclusion has seen the side fly to the top of the national rankings, scoring 25 goals in their opening four league games in Spain.

Leuven, meanwhile, were Belgian champions last season for the first time in their 90-year history. They include two players on the fringes of the Spanish national squad – Pau Quemada and Jordi Fabregas as well as Belgian internationals Patrice Houssein and Thierry Renaer.

The club is coached by Dutchman Norbert Nederlof, no stranger to Irish shores having conducted a number of coaching clinics around Leinster.

Last season, Three Rock were the direct beneficiary of Dutch import Maarten Sier and his goals. He scored the golden goal that helped Rovers beat Pembroke in the Club Championships final to gain their first European place since 1999. Sier, though, has since returned to Amsterdam leaving Rovers with a mostly Irish selection bar Venezuelan Lucas Piccioli.

O’Siochain says of their cosmpolitan opponents: “It’s do or die at this stage. It shows how much the clubs are trying to reach the top.

“That’s what we are up against in Ireland. I’ve always supported bringing in international players, and I supported Pembroke when they brought the [South African] lads in, so long as they improve the standard of Irish hockey.”

It’s an attitude which will upset a few people locally who believe that the foreign influence may reduce the chances of young Irish players to make the breakthrough but O’Siochain believes a more positive attitude needs to be taken.

“Basically, we have to take a more holistic approach and work together, rather than an ‘us against them’ attitude. That doesn’t just mean with international players but between clubs as well, to get us to the highest level.”

Realistically, Three Rock will have a greater chance of a result against Leuven but Pembroke showed Spanish opposition is not to be overly feared, pushing Egara – the eventual finalists – all the way. 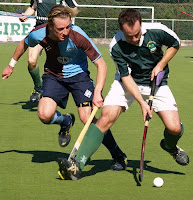 Rovers can also draw on the experience of Alan Bothwell, Garry Ringwood, Stephen Bredin and Shane Davey, four surviviors from the squad that played in the club’s last European foray. In Amsterdam in 1999, the club managed to retain ‘A’ division status – the last Irish club to do so – in the now defunct European Cup Winner’s Cup. They stayed up thanks to a 3-0 win against Dinamo Minsk and finishing above the disqualified Ekaterinaburg.

Rovers take the field this weekend almost at full strength. Long-term injury victim Andy McConnell sits out while Michael Maguire has a slight calf strain but should recover in time.

* Three Rock’s match with Leuven will be televised on Eurosport 2 live on Saturday, as will the match between Terrassa and Leuven. It follows the screening of East Grinstead against the Waterloo Ducks. You can also see all of the matches live on the internet at www.ehlhockey.tv in the live streaming menu. Finally, Sky Sports will be showing hour-long round-ups of the tournament – more details when get them.