Cole pounced as both sides dazed, expecting a penalty corner to be awarded. The advantage was well-played and the midfielder duly obliged.

That broke a 60-minute deadlock after an opening flurry saw both sides on the board inside five minutes. Jamie Haughton touched in Davy Carson’s reverse shot to give Andrews’ the lead but Carl Eggert leveled within two minutes from a penalty corner – incredibly his 12th goal in five games.

Wesley enjoyed the majority of the possession thereafter, with Kyle Good on the right and Rob Whelan and Rob Anderson down the left producing some stylish play.

Chances were few and far between, though, as both sides had four games in three days already in their legs. Eggert 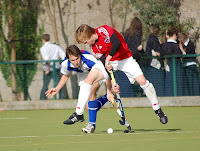 provided a constant threat. The best move of the game was all his own creation – a scintillating burst from the halfway saw three defenders left in his wake but his reverse just missed Stephen West’s goal.

But Andrews stood firm, prompted by Richard Sykes at the back and the midfield style merchants, Stu Loughrey and Stephen Cole. When the one gilt-edged chance presented itself, Cole pounced and sealed the title.

It completed a memorable week for the Booterstown-school. Pitted in the ‘group of death’ with the reigning champions, Cookstown, they were given little hope of progressing. Their 3-2 win over the Tyrone side was followed by an impressive comeback against Ashton this morning.

Dan Hobbs gave the Corkonians the lead with his ninth goal of the tournament but Cian Speers, Sam O’Leary and a sliding Rob McKenna set up a final spot.

Wesley had a simpler route through the group stages before knocking out Bandon in the last four.
Eggert was the hero, scoring twice in their 2-1 win. In the end, he racked up 12 goals in five games to complete an incredible personal performance.