Dave Passmore’s reign as Irish coach came to a rather low-key end today at Serpentine Avenue as a spirited Irish performance earned a draw against Argentina this afternoon.

During his tenure, he has overseen a huge increase in the requirements of what it takes to be an international player and boosted Ireland’s world ranking to 19th.

Passmore now completes his move upstairs to take on solely the role of IHA High Performance Director with the appointment of his successor set to be announced next week.

Looking back on his time in the role after the game today, he admitted he felt “a bit emotional” but is proud of the strides that have been made in his time, especially with the pathway from the development side into the senior squad.

The side this afternoon included a number of recent additions to the full squad who have made their way through the development panel. Players like David Ames, Jason Lynch, Keith Black, Peter Caruth, Johnny Jackson and Alan Sothern have all made the step up in the last few months.

“It’s great to see a lot of the lads that you have seen progress and develop from the age of 16 and 17 that you thought would get to this level. 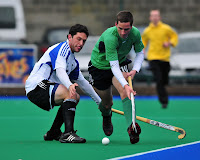 “It probably comes from four years of work. We played without ten of our senior players. What we have tried to do is develop the base [of players] through our development group so all those guys who have come in have been training on a regional basis for a good while.

“They’ve been in the gym with the senior guys and they were able to come and step in. The way the senior team have been playing, the way the development group play, the way the Under-18s play is similar so that they can step up.”

Asked whether the fact that Irish teams have developed a certain style from Under-16 up to the national level was a problem for the incoming coach, Passmore felt that the foundations in place will be a useful jump-off point for the new person.

“Having been through the interview process, most of the applicants see we have a foundation in place and they can extend upon that. It’s their license then to move things tactically and technically but I don’t see anyone that is going to come in with massive differences. I think they’ll come in and build on what we have built. It’s taken a long while to get to where we’re at.”

Speaking to The Hook about the new post, Passmore confirmed that a decision has been already been made and, though the names of the candidates must remain confidential, the inte

“Trust me, there were some really top people in there.

“I had hoped we would have had someone in place before these games but all I can say is that we have had an exceptional standard of applications with coaching Olympic coaching experience which demonstrates the perception of the Irish team now compared to three or four years ago.”

As for stepping away from the day-to-day running of the national team, Passmore admitted the day was “a bit emotional” but admits he had already stepped down a few months ago.

“To be honest with you, I was going straight after the Celtic Cup. I knew on the last day when we won the Celtic Cup so that was the emotional day for me.

“Its not just about working with the players, it’s about working with your management team and Ned [Craig Fulton] and I are a strong partnership – and we are a team. I would never take all the credit because he has done a great job, too, over these past few years.”

Fulton took on a lot more responsibility over the two games this week, patrolling the dug-out, with Passmore providing feedback and analysis from the opposite side of the pitch. They oversaw a marked improvement over the two days, as the young players got used to the pace of

As for the future, Passmore adds that what is needed to progress is a bit more self-confidence and Ireland can make that step up to the major world events:

“I think the critical thing for me moving forwards is that we have to, and I’ve said this to the players, lose the small Ireland mentality.

“We’ve got to get more expressive and dynamic in our attack because we have a good defensive base and we’re hard to beat, I think that’s going to be their main focus and that has got to start with the junior groups.

“We have ability, that’s why teams like Argentina want to come and play us but the players lose sight of that sometimes and we need to get a better belief inside us that we are good and we can compete.”